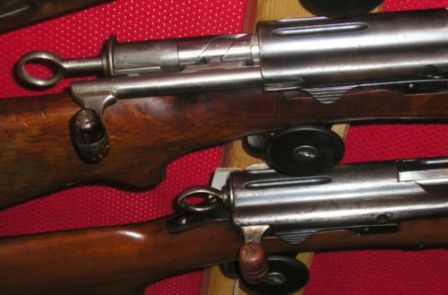 View on K31 bolt and receiver; top rifle has the bolt partially retracted; the curved track on the bolt body and stud on charging handle are clearly visible.

Swiss army always had very high standards for individual marksmanship, as well as for reliability an accuracy of weapons in use. Since the late 1880s Swiss Army was equipped with Schmidt-Rubin rifles, named so after Maj. Eduard Rubin, who developed the small-caliber rifle ammunition, and Rudolf Schmidt, who developed the straight-pull bolt action rifle. The basic pattern of Schmidt-Rubin was adopted by Swiss in 1889, and then redesigned by the 1911 along with the introduction of the new ammunition, the 7.5mm Gewehrpatrone 11 (7.5×55 GP11). By the 1932 it became apparent that the M1911 rifles and carbines are not up to date, and Swiss parliament authorized development of a new short rifle to replace both G11 long rifles and K11 carbines. In the summer of 1933 the new carbine was adopted as the Karabiner 31, or K31 in short. The K31 was still based on the straight-pull Schmidt action, but with severe modification. Most notable modification was the relocation of the locking lugs from the rear of the bolt to the front part. This resulted in much shorter bolt and receiver, making the new carbine more handy and lightweight. Being intermediate in size between earlier K11 and G11, the K 31 was noted for reliability (at least in the hands of the highly skilled Swiss riflemen), and for great, if not outstanding, accuracy. It was produced between 1933 and 1958, when it was replaced in service with 7.5x55mm Stg.57 / SIG-510 assault rifle. Total of about 580 000 K31 rifles were produced. The K31 also served as a starting point for the K31-55 sniper rifle (also designated as ZfK-55, for ZielfernrohrKarbiner model 1955, or telescope sight carbine), which, while being similar to K31 in general design, was quite different in most details. For example, K31-55 had redesigned receiver with integral scope bases and loading / ejection port moved slightly to the left side, to clear the telescope sight, and a heavier barrel with large muzzle brake / flash hider. K31-55 rifles were fitted with 3.5X magnification Kern telescope sights, graduated up to 800 meters.

The K31 is a manually operated, straight bull bolt-action rifle. The rotating bolt has two opposing lugs at the front, which are locking into the cuts in the receiver ring. The straight pull bolt handle has a large T-shaped handle and a stud, which enters the helical groove on the bolt body. When the bolt handle is retracted, the stud first forces the bolt to rotate and unlock, and then pulls the bolt back for reloading cycle. The receiver has a small opening at the top, which is used to load magazine from the stripper clips and to eject spent cases. Detachable box magazine holds 6 cartridges. Large ring at the rear of the bolt body is used as the manual safety switch, as well as for manual cocking of the striker. When this ring is pulled back and rotated to the right, it locks the firing pin and bolt, so rifle cannot be fired or reloaded. The open tangent rear sight is graduated from 100 to 1 500 meters in 100 meters increments; front sight is adjustable for windage (for zeroing only). K31 carbines were issued with slings, muzzle caps, knife-type detachable bayonets, and carrying pouches for stripper clips.