Chinese-made version of the Gew.88 – so called hanyang rifle 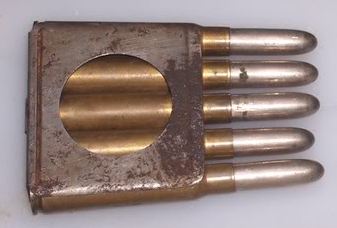 The model 1888 rifle, originally known as “Gewehr modell 1888” or “Komissiongewehr” (Commission rifle), was developed by a group of officers from GewehrPrufungsKomission (GPK, or Rifle testing commission of German army), located in the city of Spandau. Development of this rifle was spurred by introduction of the French Lebel rifle and its small-bore, smokeless powder ammunition. After learning about this revolutionary innovation in small arms, GPK quickly responded by developing its own version of the small bore ammunition loaded with nitro-powder, the 7,9×57 cartridge, which, as it turned out, later became one of the most successful cartridges of the era. The Gew.88 rifle is often erroneously referred to as “Mauser” or “Mannlicher”, but in fact it is neither. Its bolt is a more or less indigenous design by German gunsmith Schlegelmilch, and its magazine loading system is an adaptation of the Mannlicher “en block” clip. The changes, made by GPK to the Mannlicher system were not sufficient to avoid patent infringement suit. As a result, Steyr factory which held rights for Mannlicher patents, received contracts to manufacture Gew.88 rifles, and also used versions of the Schlegelmilch bolt several Steyr-made rifles, such as M1893 (Rumanian) and M1895 (Dutch). In Germany, service life of the Gew.88 as a primary infantry rifle was relatively short. After just 10 years of service it was officially replaced with the Mauser-designed Gew.98 – one of the best bolt action rifles of its time. Following adoption of the modified 7,9mm S-patrone in 1902 (with lighter and much faster “Spitzer” or pointed bullet) many of the Gew.88 rifles were adapted for this new ammunition by reaming out the front of the chamber. These rifles, sometimes referred to as “Gew.88S”, are clearly marked with the letter “S” stamped on the top of receiver, in front of the ejection opening. Starting from 1905, many of the old G.88S rifles were further modified to G.88/05 standard to make use of the new, standard issue Mauser stripper clips. After the start of WW1, some of the remaining Gew.88S rifles were modified to Gew.08/14 standard, which was generally similar to G.88/05 but more crudely made. Probably the rarest and lesser known modification of the Gew.88 line was the Gew.88/97 rifle, made for trials which were eventually won by Mauser Gew.98. The Gew.88/97 featured modified split-bridge receiver with Mauser-type bolt (with solid bolt head and third safety locking lug at the rear) and Mauser-type magazine, fully enclosed in stock and loaded using stripper clips. Only 2 000 G.88/97 rifles were ordered for troop trials and even less were actually produced.

Overall, German state factories and private companies (such as Loewe in Germany and Steyr in Austria) produced close to 2 million of G88 rifles and carbines. Of those, more than 300 thousands were later reworked into G.88/05 and more than 700 thousands – to G.88/14. An unknown, but apparently large number of modified G.88 rifles were manufactured in China on German machinery. Chinese rifles are generally known as “Hanyang rifles”, after the city of manufacture. Primary difference between Chinese rifles and their German prototype was omission of the barrel jacket on the former. Significant number of German-made G.88 rifles was also sold to Turkey. Starting 1930, Turkey rebuilt many of these rifles, using new 7,92mm barrels without jackets and new wood stocks. Most of these rifles feature sights marked in Arabic numerals.

Gewehr model 1888, or G.88 in short, is a manually operated rotary bolt action rifle. Its bolt has dual locking lugs at the front, and a detachable bolt head, which does not rotate along with the bolt body when it is locked or unlocked. The bolt head hosts claw ejector and a plunger type extractor. It must be noted that it is possible to assemble and fire the gun with bolt head removed, which will ultimately lead to disastrous results. Integral single stack box magazine holds five rounds in Mannlicher-type en-block clip. Unlike original Mannlicher clips, G.88 clip is symmetric and reversible (that is, can be inserted into the gun either side up). Empty clips fall out of the bottom of the magazine through the large opening in its base. Modified G.88 rifles, adapted for 7,9mm S-patrone by reaming out chamber throat, are appropriately stamped with letter “S” on front receiver ring. Further modified G.88/05 rifles have the bottom openings in the magazine closed by a stamped steel cover, and spring-steel cartridge retainers pinned inside the magazine body. This modification also includes machining of a cut in the left receiver wall, which allows pressing cartridges from the stripper clip and into the magazine by the thumb finger of the left hand. Stripper clip guides are machined into separate steel plates which are pinned to the rear bridge of the receiver. The wartime G.88/14 modification is essentially similar to G.88/14, but has its stripper clip guides made from material, welded up onto the rear receiver bridge. Manual safety lever has three positions and is located at the rear of the bolt. Typical feature of the G.88 rifle is the tubular barrel jacket, which is screwed onto the front of the receiver. This jacket is intended to protect the barrel from rough handling and elements. Carbines, based on the G.88, were similar in design, but had shorter barrels and stocks, and featured bent-down spoon-type bolt handles instead of the straight handles with ball-shaped grasping heads found on the full-length rifles. Rear sight was of L-shaped flip-up type. When folded forward, it exposed single fixed blade with V-notch, intended for close-range shooting (250-meter zero). When raised, it offered sliding V-notch blade with range adjustments between 500 and 2000 meters in 50-meter increments (original G.88 before S-patrone modifications had rear sight marked between 450 and 2050 meters). Original G.88 rifles also featured additional leaf-type folding rear sight, zeroed for 350-meter range, which was accessible with main sight folded. This feature was dropped on the G.88/05 and later modifications. Carbine sights were similar in design but with shorter raising frame and scale, adjustable between 500 and 1200 meters in 100-meter increments. Standard ‘accessories’ for G.88 included rifle sling, cleaning rod (stored under the barrel) and a detachable knife-bayonet.