Mosin-Nagant carbine model of 1944. Note that the bayonet is in folded position. 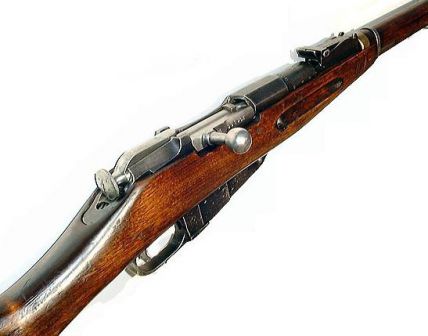 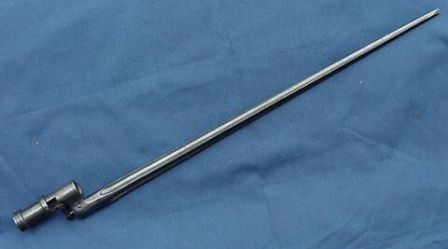 The Mosin-Nagant Rifle, known in the Russia as “Vintovka Mosina” (Mosin Rifle), was developed under government commission in the late 1880’s and early 1890’s. It was officially adopted for service by the Russian Tsar in 1891 as “Trechlineynaja Vintovka Obraztsa 1891 Goda” (three-line rifle system 1891).

Three line means a caliber of three lines; one line means 0.1 inch, (so it’s a .30 inch, or 7.62mm caliber rifle). Along with the rifle, a new, small-caliber cartridge was adopted. This cartridge had a rimmed, bottlenecked case and a jacketed, blunt nosed bullet. The rimmed case design, which at that time had already begun to be obsolescent, was necessitated by the low grade of the Russian arms industry at the time.

It also came about because of the  intention to keep the cost of the rifle as low as possible. The rimmed case, which measures its headspace from the rim, allows for much looser chamber dimensions. As opposed to rimless ones, which required headspacing on the case shoulders. This meant that the chambers for rimless ammunition must be machined much more precisely (whch is to say – on better machinery and for much more money). This decision, while probably a savings measure, caused a major coup for the Russian small arms designer. For a variety of uses, this obsolete, rimmed cartridge has been kept in general service with the Russian Army for more than 110 years!

The development of the M1891 rifle is somewhat shady and controversial. During official trials, two designs were selected for the final round – one by the Russian Army captain Mosin, and another, by the Belgian designer Nagant. The selected design, adopted by the Commission, utilized features from both. Leon Nagant was paid for his part of the design with a very serious amount of money. Mosin received a rank promotion and worked at the Sestroretsk arsenal, trying to get this rifle ready for production. The exact amount of influence of each designer is still unclear.

Since the Russian arms industry was not ready to produce this rifle at the moment of its adoption, the first batches were purchased from the Chatelleraut Arms factory of France. Full-scale local production only began in 1894 – 1895 at two major Russian state arms factories, Izhevsk and Tula. Foreign contractors were used once again to manufacture this rifle in 1916 and 1917, during the First World War. Russia at that time was in desperate need for more rifles. Contracts were signed with two major American companies, Remington and Westinghouse, which manufactured large numbers of the improved pattern M1891/10 rifle.

Because of the upheaval and revolutions in 1917 most of these rifles were not delivered to the Russian government. Later they were used in the USA for training purposes, as well as being sold to civilians. Russian production of this rifle continued until 1948 or so, when the machinery to produce it was sold to Poland.

The Mosin rifle in different variations was a standard military arm of the Russian and Red Army for some 60 years. It was also adopted and used by China, Finland, Hungary, Poland, North Korea among other countries. It is still a popular rifle in Russia and elsewhere as a civilian hunting rifle, due to relatively low prices and readily available ammunition.

The M1891 rifle was originally issued in three versions: Infantry rifle, Dragoon rifle and Cossack rifle. The two latter were clearly intended for issue to cavalry units. The Infantry rifle was a standard, long rifle with attached bayonet. The Dragoon rifle was slightly shorter and with different sling mountings, also issued with a bayonet. The Cossack rifle was similar to the Dragoon, but issued without a bayonet. Original pattern rifles are easily distinguishable by the lack of an upper handguard.

Circa 1894 the pattern was slightly changed by the addition of upper wooden handguards, and the rifles remained unchanged further until 1908. At that time a new cartridge type was adopted. This caliber featured a pointed jacketed bullet with better ballistics, so a new type of rear sights were also adopted. Other minor changes introduced in this pattern were different handguard bands and sling swivels replaced by cut-through holes with steel surrounds.

This rifle was standardized in 1910 as Model 1891/1910 and was used by the Russian army (in all three versions) throughout the First World War and later the Russian Civil War. Since 1923 the Red Army decided to abandon all but the Dragoon rifles of the 1891/1910 pattern, so production of the Infantry and Cossack rifles was ceased.

In 1930 the Red Army adopted the next pattern of the Mosin rifle, obviously designated the M1891/30. The M1891/30 rifle was an upgrade, but only slight. New sights were installed, that were graduated in meters instead of older ‘Arshins’ (Arshin – an old Russian measure of length, circa 71 cm). A new bayonet mount, more rigid, was adopted. New handguard bands were used. An improved cleaning rod fixture was applied to the stock. In all other respects this rifle was similar to the older patterns.

In 1938, the Red Army finally adopted a carbine version, called M1938, which was shorter, lighter and much handier than the basic rifle. The M1938 carbine was issued without a bayonet. During the Second World War, a new pattern of carbine, called M1944, was adopted as the main service rifle. It replaced both the M1938 carbines and M1891/30 rifles in production. The M1944 carbine was similar to M1938 except that it featured a non-detachable, side folding, spike bayonet with “+”-like cross-section.

The Mosin-Nagant rifle was relatively modern when it was first introduced. However, the continued trend for ‘economic solutions’ and minimal possible upgrades lead to an outdated and not so comfortable weapon when judged by the standards of the first half of the 20th century. The positive aspects of the Mosin rifles were the reliability and simplicity of both manufacture and service – of paramount importance for a generally poorly trained, low-educated and poorly funded Russian Army. This rifle also offered decent ballistics and acceptable accuracy. It was even used as a sniper weapon with the addition of a telescopic sight and some minor modifications.

On the other hand, this rifle had some serious drawbacks. First of all, in all patterns prior to M1938 and except for the Cossack rifles, all rifles were intended to be carried and shot only with the bayonet attached. This caused the already long rifle to be almost the same length as the average mans’ height, extremely awkward to maneuver and carry, especially in forrests and trenches. All rifles were zeroed in with the bayonet in place, so the removal of the bayonet seriously affected the point of impact and effectively required the rifle to be re-zeroed. Original pattern bayonet mounts were prone to becoming loose during that time, decreasing accuracy further.

The horizontal bolt handle was short by necessity. So, in the case of the cartridge case stuck in the chamber, a lot of strength  was required to extract it. The horizontal bolt handle was also uncomfortable to carry and slow to reload, compared to a bent down handle – a feature which did appear on the sniper versions. The safety switch, while very simple in construction, was uncomfortable to operate and required the rifle to be removed from the shoulder to apply or disengage it. Overall, this was a somewhat typical example of the Russian mass produced weapon – cheap, simple, reliable and adequate for the intended mission – but that’s all.

The Mosin-Nagant rifle is a bolt operated, magazine fed rifle. It used an integral, single stack magazine, loaded from clip chargers, with the capacity for 5 rounds. The magazine protruded below the stock just ahead of the trigger guard. It had a hinged floorplate, used to unload the magazine all at once and to clean it.

Due to the single stack design and the lack of feed lips, a special device – second-round cutoff, was built into the magazine to avoid double feeds. On early pattern rifles this device also worked as an ejector, but since the M1891/30 model, a separate ejector was introduced. The rotating bolt featured dual frontal locking lugs that were located horizontally when the bolt was locked. The Mosin-nagant rifle is striker-fired. The striker was cocked when the bolt was opened. A safety was incorporated into the bolt which locked the striker. It was applied by pulling out and rotating a knurled cap at the rear of the bolt. To disengage the safety, reverse operation was required.

The bolt could be removed from the receiver without any tools, simply by pulling it open, then depressing the trigger and removing it. It could be further disassembled without any other tools and contained very few parts. Original spike shaped bayonets featured a rectangular cross-section and a point shaped as a flat screwdriver, so that it could also be used as a disassembly tool when removed from the gun. The bayonet was always carried in battle-ready position. Some late pattern bayonet mountings featured front sight protection hoods. All bayonets were attached directly to the barrel. Stocks were usually made from birch, except for American-made M1891/10 rifles, that featured walnut stocks and were thus slightly heavier.

Sniper rifles, based on the M1891/30, hand-picked for accuracy, were issued with scope mounts on the left side of the receiver and had the bolt handles bent down.