another De Lisle silenced Commando carbine made by Sterling

one of just two De Lisle silenced Commando carbines with folding stock ever made. From SASC Weapons collection via R.D.Jones

one of just two De Lisle silenced Commando carbines with folding stock ever made. From SASC Weapons collection via R.D.Jones 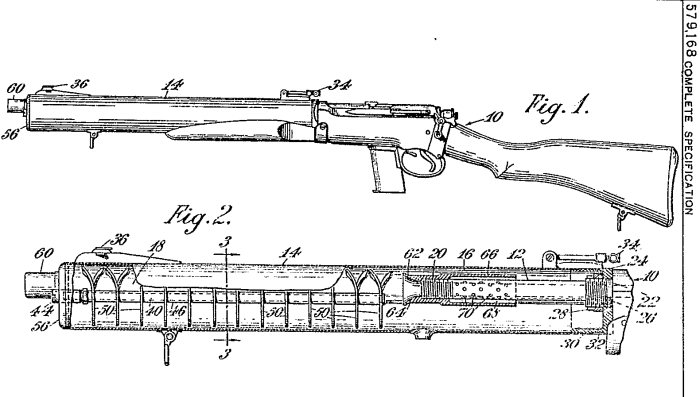 Diagram from De Lisle patent, showing design of the silencer

William De Lisle began experiments with firearm silencers in early 1920s, when he was just 16 years old or so. During his high school period he hand-made some .22lr silencers for his schoolmates to hunt rabbits.

In 1942, when working for British Ministry of Aircraft production, he designed a silenced weapon, based on the Browning .22 caliber semi-auto rifle. Major Sir M. Campbell of Combined Operations HQ (contemporary British Special Forces headquarters) learned of this rifle and eventually obtained it for test. This prototype made good impression on testers and Campbell asked De Lisle to manufacture 9mm silenced weapon, firing 9×19 Luger ammunition, for use by British Commando units behind enemy lines. De Lisle suggested changing caliber to .45ACP, as it has subsonic muzzle velocity and its heavier bullet offers better stopping power. De Lisle then built a .45 caliber prototype, which was informally tested and proved itself quite well. Campbell asked De Lisle to produce a pilot batch of his silenced carbines at Ford Dagenham factory in London. Only seventeen of these prototype De Lisle silenced Commando carbines were produced at Ford, using rejected SMLE No.1 Mk.3 rifle stocks and actions and Thompson submachine gun barrels. Several of these carbines were issued to Commando units operating against German forces in France, and few were formally tested against other silenced weapons, such as STEN Mk.II(S), with good results. De Lisle Commando carbines provided no visible flash, were almost inaudible at 50 yards, and produced adequate accuracy (2 inch groups, claimed) at the same range.

It also must be noted that in the post-WW2 period several companies and custom gunsmiths in UK (such as Law Enforcement International Ltd, or LEI) and USA (such as Valkyrie Arms) produced commercial copies of the De Lisle carbine, often based on the SMLE No.4 rifles. Most of these ‘replica’ De Lisle Commando carbines were sold on civilian markets (where permitted by local laws).

De Lisle silenced Commando carbine is a manually operated, bolt action rifle. It is built upon a SMLE No.1 rifle action and stock. Rifle bolt is shortened and its breech face recessed to accept base of the rimless .45ACP rounds. New spring-loaded ejector is fitted inside the receiver. New barrel is installed, which protrudes back into the action. Housing for the M1911 pistol magazine is made from sheet steel and installed in front of the trigger guard. On early Ford-made prototypes, this housing is relatively short and about a half of the magazine is projecting below it when loaded. On Sterling-made production carbines, this housing runs entire length of the magazine. Integral silencer is made from steel on early prototypes and from aluminum alloy of production guns. Silencer, as patented by De Lisle, consists of an external tubular housing, which contains thirteen baffles on twin guide rods. Passage for the bullet is located eccentrically inside the silencer, and baffles are shaped as spiral segments to guide powder gases away from the bore axis. Trigger and safety arrangements are retained from original SMLE No.1 rifle. Feed is from detachable box magazines, either modified Colt M1911 pistol magazines with 7-round capacity, or from specially developed 11-round magazines which are longer than standard ones. Modification to standard Colt magazines consists of an added rib at the rear of the magazine, with the notch for SMLE magazine catch (which is located inside the trigger guard, in front of the trigger). Rear sights on production carbines are modified from Lanchester submachine gun sights, graduated for ranges between 50 and 200 yards in 50-yard increments.

A “paratrooper” version of the De Lisle Commando carbine was developed by Sterling. This weapon had separate pistol grip made of wood, and a bottom-folding metallic shoulder stock. Only one or two prototypes were produced before the whole contract was canceled.