Ross M1907, officially known as Rifle, Ross, Mark II. This rifle has a Harris-type magazine with external latch, which controlled the movement of the magazine follower. This latch is clearly visible just below and to the rear of the rear sight. 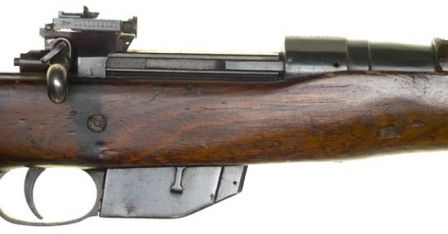 Close-up on the receiver and magazine of the Ross Mark III rifle. 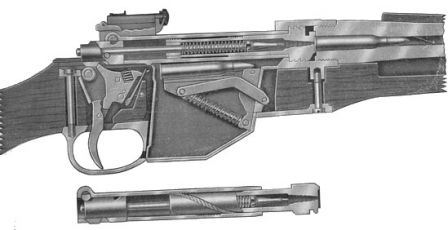 Diagram of the Ross mark III rifle. Below the rifle is the diagram (top view) of the bolt, with helical locking/unlocking cuts and ribs being clearly visible.

The origins of the Ross rifle lie in the late-1890s patents of the noble Canadian Sir Charles Ross, who developed his own pattern of the straight pull rifles, broadly based on Austrian Mannlicher M1890 / 1895 system. British and Canadian forces tested Ross rifles circa 1900-1901, but these rifles, while being quite fast in action, completely failed the reliability tests. The only fact that Britain refused to supply Canada with enough Lee-Enfield rifles during the second Boer war resulted in adoption of the .303 caliber Ross Mark I rifle in 1902. First rifles were delivered to Canadian military and Royal Canadian Mounted Police in 1905. These rifles were manufactured at the Ross Rifle Co, in Quebec. In 1907, Ross introduced a slightly improved Mark II rifle. Between 1907 and 1912, Ross turned out several star-marked modifications of the basic mark II pattern, which differed in barrel lengths, safety arrangements and other such minor modifications. In the summer of 1911 Canadian army introduced the Mark III Ross rifle, also known as Model 1910. This rifle was the principal arm of the Canadian corps in Europe during the First World war, and it turned out as a complete failure. Despite the modified magazine which could be loaded from stripper clips, the Ross Mark III rifle was too sensitive for dirt and fouling, it lacked proper initial extraction to handle dirty ammunition. The overly complicated bolt system of all Marks of the rifle did not helped the proper maintenance n the field, which also compromised reliability. The worst thing about the Ross system, however, was that its bolt could be eventually assembled in the wrong order, and in this case rifle could be assembled and then fired with the bolt not locked to the receiver – with disastrous results to both shooter and rifle. On the other hand, most Ross rifles were inherently accurate and served well as a sporter and even match rifles. After the end of First World War, most military Ross rifles were replaced in Canadian service with famous SMLE Mark III rifles of British origins, but made in Canada.

All Ross rifles are straight pull, manually operated, magazine fed repeaters. Separate bolt head with dual opposite locking lugs was inserted into the bolt from the front. The helical cuts and ribs forced the bolt head to rotate on opening and closing stroke of the bolt, thus unlocking and locking it to the receiver. The bolt lugs were made either in solid, Mauser-type pattern, or in interrupted-thread type pattern, depending on the rifle Mark. There were two patterns of magazines in Ross Rifles. Mark I and Mark II rifles had so called Harris controlled platform magazine. This magazine was generally similar to Mauser-type double stack magazine, but could not be loaded from stripper clips. Instead, there was an exposed finger piece, connected to the magazine follower. To load the Harris magazine, shooter had to open the bolt, depress the finger piece at the right side of the stock with its finger to compress the magazine spring and lower the follower, and then spill the five loose rounds into the magazine opening. Upon release of the finger piece the magazine follower spring is released, and bolt could be closed, thus completing the loading cycle. The Mark III rifles had a Lee-type single stack magazine, which protruded below from the stock. This magazine could be loaded from standard 5-round stripper clips, and the clip guides were machined into the front of the rear sight block. The type of rear sight was another change from the Mark II to Mark III. While Mark I and II rifles featured tangent rear sights, mounted ahead of the receiver, on the top of the barrel, the Mark III rifles featured a diopter-type rear sight, mounted on the rear bridge of the receiver. There were other variations in marks and modifications, such as in the shape of stock and handguards.