M1903 rifle made by Springfield armory in 1944 – top view on the receiver (image by Allan Blank) clearly seen are the stripper clips guide, magazine cut-off (bolt stop) and safety switch.

M1903 Mark 1 rifle, modified for Pedersen device. the cut in the receiver wall is for ejection of the Pedersen spent cases. 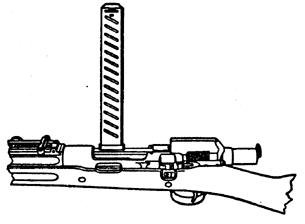 Partial drawing of the M1903 Mark 1 with Pedersen device installed. Note the long magazine protruding from the rifle up and to the right, and enlarged bolt section of the Pedersen device.

M1903A3 made by Remington during the World War 2 – left side. note the straight grip stock.

Another M1903A3 made by Remington during World War 2 – right side. Note that this rifle has so called “C-stock” with semi-pistol grip.

M1903A4 Rifle – sniper version of the M1903A3 with C-stock and iron sights replaced by a telescopic sight. 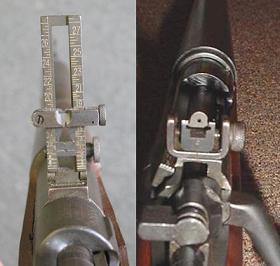 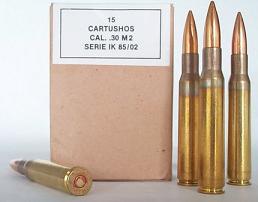 The story of the ‘US Rifle, .30 caliber, M1903′, more generally and otherwise known as the ‘Springfield M1903′, began late in the 19th century. At that time US troops were engaged in the Spanish – American War. They found their bolt-action, .30 caliber Krags and .45 caliber single-shot Springfield “trap-doors” far inferior to the bolt-action Mausers that were used by Mexican troops.

It was soon discovered that a more powerful and faster firing rifle was required. The Krag rifles were too weak to fire the ammunition desired by the US Army authorities, also lacking some vital features, such as clip-loading. Therefore in 1900 the state-owned Springfield armory was set up to build a new rifle, based on the battle-proven Mauser design. Springfield entered into negotiations with the Mauser company and finally acquired the rights for their bolt action design for US $200 000.

The initial design featured a spike bayonet, but it was disliked by president Theodore Roosevelt personally, so the rifle was sent back to the factory for a redesign. With this rifle design, Americans also adopted the idea of the common “short” rifle, originally adopted by the British with their SMLE in 1904.

This “short” rifle was equally suitable for both infantry and mounted troops. In the meantime, Germany introduced its “spitzer” bullet design. This was a pointed bullet, relatively light, with much better long-range ballistics. Following the trend, US manufacturers redesigned their newest .30-’03 cartridge to accept the new bullet, weighing 150 grains (9.7 g) with the muzzle velocity of of approx. 2900 fps (880 m/s). This round was adopted as  “Cartridge, Ball, .30 caliber, Model of 1906”, or, simply, “.30-06”.

The new rifle was re-fitted with sights regraduated for the new cartridge, and was issued to US troops. With the outbreak of the First World War it was soon discovered that the US had insufficient numbers of M1903’s to arm their expeditionary corps in Europe. The US Army quickly adopted the Model 1917 rifle – Enfield pattern 1914 rifle (P14) redesigned from .303 British to .30-06, but this is another story.

The M1903 rifles were manufactured by the state-owned Springfield armory and Rock Island armory. Some early made (prior to 1918) M1903 rifles were known to have fragile receivers due to improper heat treatment. The problem was soon solved by the introduction of a new steel treatment process.

During the interwar period, there was little development of the M1903. In 1929, the US adopted a modified pattern M1903A1, which was no more than the basic design with a different type of stock. It had a semi-pistol grip instead of the straight, English-style grip. Only a few of the M1903A1’s were made however. With the outbreak of the Second World War the US army again found itself short of rifles, and while the standard US rifle was already the semi-automatic Garand M1, it was decided that it must be supplemented by a simpler and cheaper to produce bolt-action rifle.

The Remington Arms company was set up to create a simplified for wartime production variant of the M1903. Adopted in 1942, the M1903A3 rifles featured a number of parts made by stamping instead of machining, receiver-mounted peep-hole sights instead of the leaf-type tangent sights, and on some rifles, A1 type stocks with semi-pistol grips (so called C-stocks). Some M1903A3 rifles were also fitted with 2 groove barrels instead of the more common 4 groove barrels. M1903A3 rifles were manufactured by Remington Arms and Smith-Corona Typewriters. The M1903A4 sniper rifles, manufactured by Remington Arms co, were no more than factory ‘accurized’ M1903A3’s with their open iron sights replaced by telescopic sights. This was probably the longest serving version of the M1903, used by US troops until the 1960’s as sniper rifles.

There were two more offspring in the M1903 family. The first was the M1903 Mark 1 Rifle, developed during WW1 by the US engineer and designer Pedersen. This was no less than a conversion of the manually-operated rifle into a magazine-fed, semi-automatic rifle. Standard M1903’s were altered to accept a so called “Pedersen device”, officially known as a “US pistol, semi-automatic, .30 caliber, M1918”. This device was inserted into the modified M1903 action instead of the standard bolt, and featured a semi-automatic action with box magazine, that fired a specially-designed .30 caliber (7.62mm) straight-wall cartridge of relatively low power. This allowed every soldier equipped with the modified M1903 to fire rapidly from the hip while advancing onto enemy positions. The device was fed from a 40 round magazine, and required an ejection port to be cut in the left wall of the receiver. The Pedersen device was found to be ineffective and had numerous drawbacks. Finally, in the 1920’s almost all “M1918 pistols” were scrapped and Mark 1 rifles converted back to the standard pattern.

The second variation was the M1903A2, which was, not so much a rifle, as a barreled action with mountings. It was intended to be inserted into and fired from gun barrels for low-cost, short-range training. Initially intended for 3″ (76mm) coast guns, this device was later adopted for numerous other large guns.

The M1903 rifle is a manually operated, rotating bolt, magazine fed rifle. The action of the M1903 represents a modified Mauser action, with dual front lugs, locking into the receiver, and an additional lug at the rear of the bolt. Unlike the Mauser design, on the M1903 the rear lug was located horizontally on the bolt when the bolt was closed, or in straight up position when unlocked. This required a split-bridge at the rear part of the receiver. The bolt handle was bent downwards and located at the rear of the bolt.

The extractor was Mauser-type, non-rotating. On the left side of the receiver there was a magazine cut-off in the form of the bolt stop switch. This switch, when engaged, limited the bolt travel so the spent case still could be extracted but the new cartridge cannot be feed from the magazine, thus converting the rifle to single shot. The safety was also of Mauser type, located at the rear of the bolt. The M1903 was a striker fired design, with cocking on the open bolt, and a firing pin knob protruding behind the bolt, so the action state could be easily checked manually or visually if cocked or not.

The box magazine was integral to the action and held 5 rounds in staggered order. The magazine could be filled with single rounds or commonly by using 5-round stripper clips. These were inserted into a clip slot, machined into the receiver bridge.

The iron sights of the M1903 consisted of blade front sight and barrel-mounted tangent-type leaf rear sights. On the M1903A3 the rear sights were replaced by peep-hole (diopter) sights, mounted on the receiver bridge, and M1903A4 sniper rifles had no open sights at all, instead replaced with M73B1 2.5X telescopic sights (commercially known as Weaver model 330).