Close-up view of the receiver, with bolt in closed position, showingĀ charging handle and rear sight of the M1 Garand.

M1 Garand stripped action; clearly seen are the magazine housing, operating rod and a part of the return spring behind the operating rod. 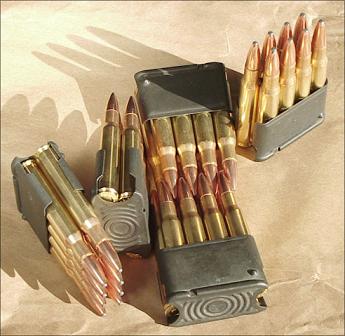 The story of the M1 GarandĀ Is thatĀ of theĀ first semi-automatic rifle ever widely adopted as a standard military arm.Ā ItĀ began soon after the start of the First World War, when inventor John C. Garand (a Canadian, then living in the USA) began to develop a semi-automatic (or self-loading) rifle. He worked at the USĀ Government owned Springfield Armory during the 1920’s and early 1930’s developing a number of different models.

Garand’s earlyĀ prototypes were built usingĀ the somewhat rare system ofĀ advanced primer ignitionĀ (API)Ā blowback, but forĀ variousĀ reasons this system was overly sensitive and thereforeĀ unsuitable for a military rifle. HeĀ switchedĀ to the more common gas-operated system.Ā Garand filed a patent for his semiautomatic, gas operated, clip-fed rifle in 1930, and received a US patent for his design late in 1932.

This rifle was built around the then-experimental .276 caliber (7mm) PedersenĀ cartridge. At the same time, his rifle was tested by the US Military against its main competitor,Ā the Pedersen rifle, and was eventually recommended for adoption by the US Army early in 1932.

US general MacArthur however,Ā made a statementĀ that the US Military should stick to the old .30-06 cartridge. Foreseeing this turn of events, Garand already had a variation of his design chambered for this caliber. Finally,Ā on the 6th January, 1936, Garand’s rifle was adopted by the US Army as ‘Rifle, .30 Caliber, M1’. Early issue riflesĀ  showed quite poor characteristics however, jamming way too often for a decent military arm.Ā A lot of noise wasĀ made that eventually reached the ears of the US Congress. In 1939,Ā a major redesign was ordered. Garand quickly redesignedĀ the gas port system, which greatly improved the reliability of the new weapon. Almost all M1 rifles of early issue were quickly rebuilt to adopt a new gas system, so very few ‘original’ M1 Garand rifles survive to the present day – nowĀ extremely expensive collectors items.

When the USA entered World War 2, mass production of the M1 rifleĀ beganĀ at the Springfield armory and at the Winchester plant. During the war, both companiesĀ produced between them approximately 4 million M1 rifles, so theĀ M1 Garand isĀ the most widely used semi-automatic rifle of World War 2 by far.

During the war, the M1 Garand proved itself as a reliable and powerful weapon. TheĀ fact that the gun was semi-automatic and not ‘bolt operated’Ā allowed for much fasterĀ cycling and target acquisition, while theĀ .30-06 round providedĀ very effective stopping power. HavingĀ witnessed its performance in battle, General George S. Patton said ofĀ the Garand: “In my opinion, the M1 Rifle is the greatest battle implement ever devised”.

There were some minor attempts to improve it furtherĀ during the war, but these did not leave theĀ experimental stages, except for two sniper modifications, M1C and M1D. Both were approved for service in 1945 and both featured a telescopic sight which was offset to the left due to the top-loadingĀ nature of the M1. These rifles had iron sights intact so that they could be used in the case of scope damage, for instance. At the end of WW2 production of the M1 in the USA stopped, and some rifles and also licenses to build it were sold to other countries, such as Italy and Denmark.

With the outbreak of the Korean war in 1950 the production of the M1 for US forces was resumed again early in 1952. This timeĀ M1 Garands were manufactured at the Springfield armory, also at Harrington & Richardson Company (H&R) and the International Harvester Company. Those companies manufactured themĀ until 1955, and theĀ Springfield ArmoryĀ continued to produceĀ them until 1956.

With the official adoption of the M14 rifle and respectiveĀ new 7.62x51mm NATOĀ ammunition for US service in 1957,Ā the M1 rifle became obsolete. It still foundĀ use during later years, however,Ā because ofĀ a lack of M14 and M16 rifles, and saw some service during the early period of the Vietnam war. Later, many M1’s were transferred to the US National Guard, used as training weapons by the US Army or sold to civilians as military surplus. A few M1’s are still used by all branches of the US Military as ceremonial weapons.

Other than the USA, M1’s were used by the Italian militaryĀ (where these rifles were redesigned and rebuilt into 7.62mm BM-59 rifles). Denmark, France and some other countries also utilised M1 Garands. There were alsoĀ  attempts to rebarrel the M1 for the 7.62mm cartridge in the USA and to adopt a detachable 20-round magazine from Browning BAR rifles, but these were less than successful and haven’t seen any significant service.

The M1 Garand is a gas operated, magazine fed, semiautomatic rifle. Original M1’s used the gas tapped from the muzzle by aĀ special muzzle extension (Gas trap operation). This was proven unreliable though, and since 1939, M1 rifles were built with a systemĀ using a gas port, drilled in the barrel near the muzzle similarly to modern assault rifles. The tapped gas was directed into the gas cylinder, located under the barrel, where it operated a long-stroke gas piston, integral with the operating rod.

The long operating rod houses inside it a return spring, and ends with the extension that carries a bolt operating groove at the left and a charging handle at the right. The groove connects with the rotating bolt, located inside the receiver. The bolt has two locking lugs that lock into the receiver walls.

When the gun was fired, hot powder gases were led to the gas chamber and to the gas piston, that drove back the operating rod. The bolt operating groove interacting with the stud on the bolt, rotated the bolt to unlock it and then retracted it to commence the reloading cycle.

The M1 was fed fromĀ an integral box magazine, which was probably the weakest point of the whole design. The magazine was fed using only 8-round clips, which could not be easilyĀ “topped off”, staying inside the magazine until all 8 rounds were shot. As soon as the magazine (and clip) became empty, the bolt was stopped at its rearward position by the bolt catch, and the empty clip was automatically ejected from the magazine withĀ a distinctive ‘ping’Ā sound. The main drawback of the system was that the clips could not be easily reloaded during action, and enemies close by could hear when the rifle was empty..

Mind you,Ā soldiers and marines had a few tricks up their sleeves..Ā They found by throwing the clip on a hard surface they could reproduce the ‘ping’, while fully loaded..Ā

It was possibleĀ to refill the clip in the rifle, but this was not the fastest procedure.

The M1 featured a wooden stock with separate handguards and a steel buttplate. The forwardmost part of the muzzle served as a bayonet mounting point. Sights on the M1 consisted of the front sight with dual protecting ‘wings’, dovetailed into the gas block at the muzzle. The adjustable peephole rear sights wereĀ built into the rear part of the receiver.

There were some attempts to make a handier and more compact version of the M1 by shortening the barrel by some 6 inches (152 mm), with standard wooden or skeleton metallic buttstocks, but these attempts never left the experimental stages. Some short barreled “tanker” M1 rifles, appearing in the post-war period, are not genuine designs, butĀ merely ‘sawn-off’ variations of the standard long rifles.