Top view on the K98k action. clearly seen are safety switch, extractor and stripper clip guides
(“7 62” markings on the receiver ring mean that this particular specimen was rebarreled to the 7.62mm NATO / .308 Win cartridge)
image courtesy of DOC. 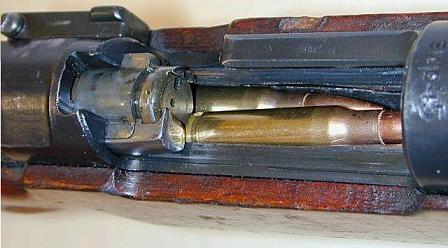 View on the partially open K98k action, ready to feed another round
image courtesy of DOC. 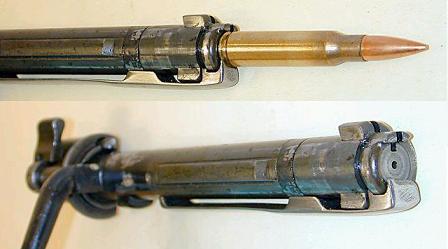 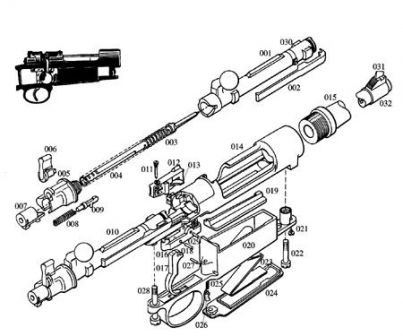 Exploded view of the Mauser 98 action.

The Gewehr 98 Rifle was invented by the Mauser company, established by the two brothers Peter and Paul Mauser. This company earned its excellent reputation in firearms making in the last decades of the 19th century.

They continued to build very well thought-out and skilfully made firearms until the end of World War 2. Some years after the war, the Mauser company was restored in West Germany and continued to build firearms, but mostly larger-caliber ones, like aircraft cannons. Some of the earlier Mauser works became the standards against which all other designs are judged, even some 100 years after their introduction.

One of these designs is undoubtably the famous Mauser model 1898 rifle, also known as Gew. 98 or simply G98 (G = Gewehr, “Rifle” in German). This rifle was created out of the experience gained from previous Mauser designs, and first appeared in 1898 as the standard German army infantry rifle. It was carried by Germans throughout the First World war, along with a carbine or shortened version, known as K98 (or Kar98, from Karabiner, German for “Carbine”).

In 1904 the Germans were the first to introduce the new, “Spitzer” bullet (with pointed tip, instead of the older blunt, round-shaped tip). This new bullet had much better long-range ballistic properties, so all sights were regraduated for the new ammunition.

During the interwar period this fine design was slightly altered to become the K98k – ‘Karbiner Kurz’, or short carbine. This was a somewhat shorter, lighter and handier version of the original one. This version appeared in 1935 and was manufactured until 1945 in large numbers; not only by Germans, but also by numerous other countries under their occupation.

Many versions of this design were licensed to other countries who built their own versions of the G98. Most famous of these “foreign Mausers” are the Persian, Turkish, Czech VZ-24’s, Yugoslavian Mausers and a variety of others. The vast panoply of Mauser-type rifles could easily cover a number of pages. For the sake of compactness, here I will describe the basic German model only.

The internal magazines could be topped either with single rounds, by pushing rounds into the receiver top opening, or via the use of stripper clips. Each clip holds 5 rounds, enough to fill the magazine, and is inserted into the clip guides, machined into the rear receiver bridge. After loading, the empty clip is ejected automatically when the bolt is closed. the magazine could be unloaded by operating the bolt (safety must be in the middle position!) or by removing the magazine floorplate (not recommended).

The Mauser bolt is a simple, extremely strong and well thought out design. The bolt has three locking lugs, two at the bolt head and one at the rear part of the bolt. The bolt handle is rigidly attached to the bolt body. On the original Gew. 98 rifles it was straight and located horizontally when the bolt was in the closed position. On the K98k the bolt handle is bent downwards, which allows for more comfortable carrying and bolt operation. The bolt has gas vent holes that are designed to allow the hot gases to pass away from the shooters face and into the magazine opening in the case of cartridge case or primer rupture.

The next famous feature of the model 98 bolt is called a “controlled feed” extractor. A massive, non-rotating claw extractor was designed to engage the cartridge rim as soon as it left the magazine. It held the cartridge case firmly until it was ejected by the ejector, fixed inside the receiver. Combined with a slight bolt retraction at the last stage of the bolt turn-open rotation, caused by the cammed surface on the rear receiver bridge, this resulted in very positive primary extraction. The Model 98 is a striker-fired weapon. The striker is cocked when the bolt is rotated to its open position, allowing for a smoother forward bolt pull. The rear part of the striker is protruded from within the bolt, so the state of the action (cocked or not) can be checked visually or even manually.

The bolt group can be easily removed from the receiver simply by pulling out the bolt stop, located in the left wall of the receiver, and then by rotating and pulling the bolt out. The safety switch is located at the rear of the bolt and has three positions: left position (when looking from behind the rifle) locks the sear and also locks the bolt in place, so it cannot be rotated and opened. in the middle (raised) position it still locks the sear, but the bolt is unlocked and can be operated, to load and unload the rifle; and in the right-hand position, the rifle is ready to fire. The safety could easily be operated with the thumb of the right hand.

The model 98 rifle featured a one-piece wooden stock with semi-pistol grip. Gew. 98 and Kar 98K differ not only in the length of the barrel and the front part of the stock – they also have different sling mountings. While the Gew. 98 has two sling swivels, the K98k has only one, forward swivel. Instead of the rear swivel there’s a through cut in the buttstock, through which the sling is passed.

The rifles also have different rear sights: Gew. 98’s have a curved, tangent sight, while the Kar 98k has a more modern, leaf type rear sight. The front sights are of the open, barleycorn type and on some carbines, removable semi-circular front sight hoods.

As a matter of interest, the clasp used to attach the sling on the Kar 98k has now found international fame and constant use with climbers and abseilers around the world: the ‘Carabiner’ clip.