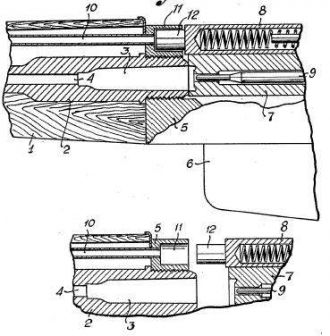 Drawing from patent, issued in the USA in 1943 to Erik Eklund; AG-42 rifle gas system is based on this patent.

The AG-42 rifle (official designation Halvautomatiskt Gevaer 42) was developed by Swedish engineer Erik Eklund while working at company C. J. Ljungman AB. Officially adopted by Swedish army in 1942, this rifle served in Sweden until mid-1960s, when it was replaced in service with 7.62mm AK-4 rifle (license-build HK G3 rifle). Most AG-42 rifles were manufactured during WW2; since 1953 most of the Swedish rifles were modified to AG-42B pattern. The machinery and documentation then had been sold to Egypt, where the licensed copy of AG-42 was produced as 7.92mm Hakim rifle. The basic AG-42 system was also modified to produce Egyptian Rasheed 7.62x39mm carbine, which was made in relatively small numbers. Many of Swedish-made AG-42B rifles, as well as some Hakim and Rasheed rifles were later sold on surplus market. Danish company Madsen Syndicat AB tried to produce license-built AG-42 but apparently never went past prototype stage.

The AG-42 is a gas operated, semi-automatic weapon. The direct impingement gas system has no gas piston; instead, hot gases are fed from barrel via gas tube to the bolt face, where they act directly on the bolt carrier. The AG-42B differs from early AG-42 by having stainless steel gas tube without gas “reservoir”, which was originally used to decrease peak pressure. The barrel is locked by tipping the rear part of the bolt down into the recess in the receiver, very similar to Russian SVT-40 or Belgian FN FAL rifles. The bolt group has no dedicated bolt handle; instead, a sliding receiver cover is used to retract the bolt group manually. To cycle the bolt manually, one must grasp the receiver cover and push it all the way forward. The cover will engage the bolt carrier, and, when pulled back, will take the bolt group along. At the end of the rearward movement, the bolt carrier is automatically disengaged from receiver cover, and then it slams forward under the pressure of the return spring. The AG-42B differs from earlier AG-42 by updated grasping surfaces on both sides of the cover (AG-42 has serrations; AG-42B has conical bulges). Additionally, AG-42B has a rubber brass deflector mounted behind the ejection port on the right side of the receiver cover. There are other internal modifications, including the updates to the extractor, bolt group etc. Detachable box magazine holds 10 rounds, but also can be refilled in-place, using standard Mauser-type stripper clips (2 clips per magazine). AG-42B has open sights, with front sight adjustable for windage, and the rear sight, adjustable for range from 100 to 700 meters by 100-meter intervals. Safety lever is located at the rear of the receiver, and is switched to the left for “fire” and to the right for “safe”. When engaged, safety locks the trigger and sliding cover, so rifle cannot be cycled manually or fired. AG-42 and AG-42B rifles can be equipped with Mauser-type detachable knife – bayonets.