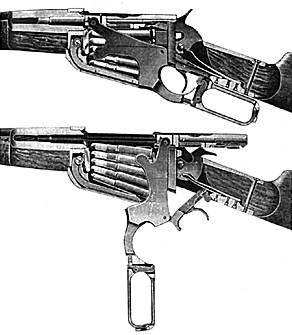 The Winchester 1895 rifle has been developed by famous designer John Moses Browning as a hunting rifle, capable to safely handle long and powerful rifle ammunition, unsuitable for earlier Winchester lever-action rifles. Of about 426 thousands of M1895 rifles, made made by Winchester between 1895 and 1931, about 300 thousands were made on Russian military contract between 1915 and 1917. Of those, about 293 000 rifles reached the Russia before the revolution broke out. Small numbers of Winchester 1895 rifles, chambered for .30-40 Krag ammunition and fitted into military-type stocks, also were acquired between the 1897 – 98 and used by US forces during the Spanish-American war.

Compared to contemporary military-type bolt action rifles, Winchester M1895 rifles were slightly faster to operate, thanks to its lever-action system; in Russian pattern these rifles also were fitted with clip guides, which allowed for faster reloading. On the other hand, M1895 rifles were more sensitive to fouling and dirt, than the Mosin M1891 or Mauser 1898, and the lever action was less comfortable to operate when firing from prone position, so typical for XX century warfare.

The Winchester M1895 is a lever action, magazine fed rifle. The horizontally sliding bolt is locked to the receiver by the vertically sliding locking piece, which slides in the receiver grooves up to lock the bolt and down to unlock it. The bolt is locked at its rear, just behind he magazine, but the action is strong enough to safely handle such powerful cartridges as .30-06 or .405 WCF. Movement of the bolt is controlled by the manually operated lever. The interesting feature of the M1895 design is that the trigger is disconnected from internal lockwork during the reloading cycle – an useful safety feature. External hammer also provided additional visual control of the state of the rifle. The box magazine held five or six cartridges in single column, and was loaded through the top opening in the receiver; spent cartridges also were ejected to the top. All M1895 rifles except the Russian-contract ones were loaded with single rounds; Russian-contract rifles were fitted with clip guides, and accepted standard stripper clips from Russian Mosin M1891 rifle. Military-type rifles were fitted with long stocks with straight grips and short forends, as well as bayonet lugs and sling swivels. Commercial rifles were available with various styles and grades of stocks. Most M1895 rifles were witted wit open tangent rear sights and unprotected blade front sights.