Close-up view on the receiver and magazine of M1941. Note the horizontal loading gate with stripper clip guides, located between the magazine and the bolt handle / ejection slot. 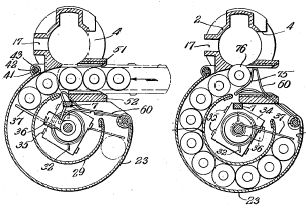 Schematic drawing of the M1941 rotary magazine, from Johnson's patent.

Melvin C. Johnson, an American arms designer, developed his semiautomatic rifle by the mid-1938, and submitted it to the US Army trials. Trials and development of the rifle continued until the early 1940, when the Army Ordnance Board finally rejected the Johnson rifle as being too long and heavy, and potentially unreliable with the bayonet attached. Same year Johnson submitted his rifle for trials to the US Marine Corps, where it was tested against M1 Garand rifle. First tests results were good for Johnson, but later on the M1 Garand rifle was found superior to it. In 1941 Johnson named his rifle as "Model 1941", and the same year the Dutch Government ordered 70 000 rifles from Johnson for its West India colonies, fearing invasion from Japan. For this order Johnson created the Johnson Automatics Mfg plant. At about the same time USMC parachutists forces became interested in Johnson rifle, as it was easy to take down for compact carry during parachute drop, and then easy and quick to reassembly. As the Dutch colonies were already occupied by Japan, USMC procured many of M1941 rifles, made to Dutch order. Compared to M1 Garand, M1941 Johnson rifle had some good and some bad features. Good features were good accuracy and bigger magazine capacity with capability for reloading partially full magazine with loose cartridges. Bad features were a number of smaller parts which were easily lost during field stripping, and less available spare parts. Overall, about 30 000 of M1941 rifles were produced during the WW2. After the war, USMC returned all remaining rifles to the Netherlands Purchasing Commission.

Johnson M1941 is a short recoil operated, semiautomatic rifle. Barrel is locked by the rotating bolt with eight locking lugs, engaging into the barrel extension. On recoil stroke, bolt head is rotated to disengage from the barrel, and then barrel is stopped and returned into forward position with its own spring; bolt continues its way back to extract and eject the spent cartridge case and then to chamber fresh cartridge on its way forward. Return spring is located in the buttstock. The rifle is fed from fixed rotary magazine, which holds 10 cartridges. Cartridges can be loaded into the magazine via the loading port in the magazine at the right side of the gun, using the standard M1903-type stripper clips (2 clips with 5 rounds each) or loose rounds. Magazine can be refilled at any time either with the bolt open or closed. Magazine loading port is closed by the spring-loaded dust cover. It must be noted that pre-war Johnson rifles were available either with rotary or box magazines, but box magazine versions apparently are very scarce, as very few of these were produced. Rifle is fitted with two-piece wooden stock, steel handguards were integral to the receiver. Military rifles were equipped with proprietary detachable lightweight spike-shaped bayonets, as the standard knife bayonets were too heavy and affected the reliability of a recoil-operated mechanism. These bayonets had no separate "handle" and were hardly useful and provided only to fulfill military requirements.