Mondragon M1908 rifle, as made by SIG in Switzerland. 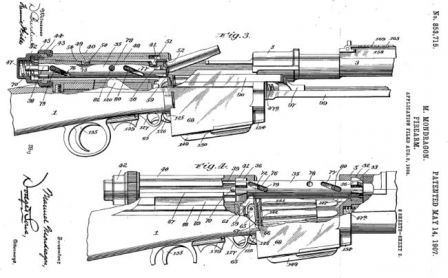 Mexican general Manuel Mondragon began his work on new military rifles before the turn of XX century; as early as in 1896 he received patents for his straight-pull bolt action rifle with rotary bolt locking. Later on, Mondragon evolved this design into a gas-operated, self-loading rifle. His early experimental self-loading rifles were built for special experimental cartridges of 5 – 6 mm caliber; but in around 1900 Mondragon developed an improved system chambered for standard Mexican military rifle ammunition, 7x57mm Mauser. Further modification of this weapon, patented in 1907, was officially adopted by Mexican army in 1908 as "Fusil Porfirio Diaz Systema Mondragon", and manufacturing orders were issued to Swiss-based SIG arms factory, because Mexico has no proper arms making facilities. Because of political disturbances in Mexico, only few Mondragon rifles were issued to Mexican army; most produced rifles were left in Switzerland, and later were bought out by Germans, who were desperate for rapid-firing arms since the start of the Great War (WW1). Some of these rifles were fitted with 30-round drum magazines and issued to airplane crews as Fliegerselbstladekarabiner Modell 1915 (before light machine guns were taken into air), and few more were issued to front-line troops (with standard 8-round or extended 20-round magazines). The service life of these rifles in German army was rather short, as Mondragon system was sensitive to dirt and fouling, which were so typical for trench warfare of WW1
Nevertheless, Mondragon rifle was a remarkable weapon, which was well ahead of its time. Many of its features (gas-operated action, rotary multi-lug bolt) can be found in later and more successful weapons such as US M1 Garand rifle, and many others.

Mondragon rifle is a gas-operated, semi-automatic weapon which can be quickly converted into manual repeater (and back) by the turn of the gas valve, located at the front of the gas block. The operating system consists of a long-stroke gas piston, which is located below the barrel, and is connected to the bolt through operating rod, which runs from the gas piston and to the bolt at the right side of the receiver. Return spring is located below the barrel and acts upon operating rod. The charging handle has a special lever at its front which, when pressed, decouples the bolt and operating rod, so bolt can be cycled manually without need to compress powerful return spring. The rotary bolt is somewhat unique in that it has two sets of radial locking lugs, at the front and at the rear of the bolt body, resulting in very positive and strong locking. Bolt is rotated to lock and unlock through two spiral cuts, made on its right side. These cuts are engaged by the projections on the massive operating slide, which also hosts the bolt handle. Rear of the receiver has a spring buffer which is used to decrease recoil stress on the receiver in semi-automatic fire.
Early experimental self-loading rifles of Mondragon design used en-block clips similar to that later used in M1 Garand rifles. Swiss-made production Mondragon rifles relied upon detachable box-type two-row magazines which held 8 rounds. These magazines could be reloaded either when detached or when installed on the gun, using stripper clips or single rounds, loading through the top of the open action. In German service, Mondragon rifles were fitted with extended-capacity 20-round box or 30-round drum magazines.