6.5mm Arisaka Type 38 carbine, with the bolt cover in place. 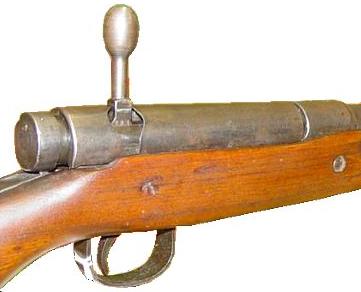 7.7mm Arisaka Type 99 rifle, close-up view on the receiver, bolt cover installed, bolt handle is turned up and ready to be pulled back.

Japanese Army began the search for a new small caliber magazine rifle in 1894, with intention to replace obsolete Murata rifles. For this purpose Imperial Army created the commission, led by Colonel Nariake Arisaka. First design, known as Type 30 rifle (30th Year of Emperor Meiji, or 1897 A.D.), showed some deficiencies during the Russo-Japanese war of 1905, and the updated design appeared in 1905-1906 as the Type 38 rifle, generally known as Arisaka type 38. This rifle, chambered for relatively mild 6.5x50SR ammunition, was manufactured in several versions, including long rifle and carbine variants. More than 3 millions of Type 38 rifles were manufactured by various Government arsenals. The Arisaka Type 38 rifle was heavily influenced by contemporary Mauser designs, but also had some unique features.
After serious battle experience in China, Japanese Army decided to step up in caliber and power, and introduced the 7.7x58mm ammunition. The 7.7×58 cartridge was based on the British .303 round (7.7x57R), with the rim removed. New rifle was based on the Type 38 design, and was designated as Type 99 (this is another Japanese nomenclature, actually meaning that the rifle was adopted on year 2099 from the creation of the world). In 1940 Japanese Army adopted the short pattern of the Type 99 rifle, which replaced both long infantry rifle and carbine. More than three and a half millions of Type 99 rifles were manufactured in Japan between 1938 and 1945. There were some further developments, for example, several sniper rifles, fitted with 2.5X or 4X scopes, as well as several take-down rifles, intended for paratroopers. First takedown rifles were made in small numbers from standard Type 99 rifles and featured interrupted screw joint between the barrel and the receiver. This system proved to be too weak, and in 1942 Type 02 paratrooper take-down rifle has been introduced, with simple and rigid cross wedge lock. This rifle, chambered in 7.7×58, has been adopted in mid-1943.
Arisaka Type 38 and, especially, Type 99 rifles are generally quoted as very strong rifles, but this refers only to the rifles, made before the late stages of the World war 2. Late-war rifles, sometimes known as Substitute Type 99, or "last ditch" Type 99 rifles, were often made from low grade steel, with no heat treatment and no finish. Many of these rifles were simply dangerous for shooters to fire.

Arisaka Type 38 rifle is a manually operated, rotating bolt design. Mauser-type bolt has two frontal lugs, and non-rotating Mauser-type claw extractor. Mauser-type integral magazine held five rounds, and was loaded using either stripper clips or loose rounds. One specific feature of Arisaka rifles was the sliding bolt cover, which protected the receiver openings from harsh pacific climate, and reciprocated along with the bolt. This feature was hardly useful, especially as it rattled when the bolt was operated. Not surprisingly, many soldiers removed these covers from their rifles. Another specific feature of Arisaka Type 99 rifles was the anti-aircraft sight with lead bars, intended for shooting at low flying aircrafts. This feature also had a very little practical value, as even the 7.7mm ammunition was way too weak to do any serious damage to WW2 era attack aircrafts. The chances to hit the fast moving aircraft like F6F Hellcat or F4U Corsair with the shots from bolt action rifle also are diminutive, to say the least, so this feature, probably, had more psychological effect than anything else. The manual safety is controlled by the large rotating knob at the rear end of the bolt. The knob is usually serrated (late-war rifles has no serrations as a money and time-saving measure), and had an indexing groove, which allows to check the state of the safety manually and visually. Some rifles, including Type 02 paratroop rifles, also have folding monopods, made from steel wire and located under the forend. The paratroop rifles were easily disassembled into two parts, the receiver with the buttstock, and the barrel with the forend. To take the rifle down into two major parts, one must unscrew and then pull the cross wedge out, and then pull the barrel forward and out of the receiver.