Pedersen T1 rifle, as made and tested in USA

Vickers-Pedersen rifle, made in UK

prototype Pedersen-type rifle, made in Japan

prototype Pedersen-type carbine, made in Japan 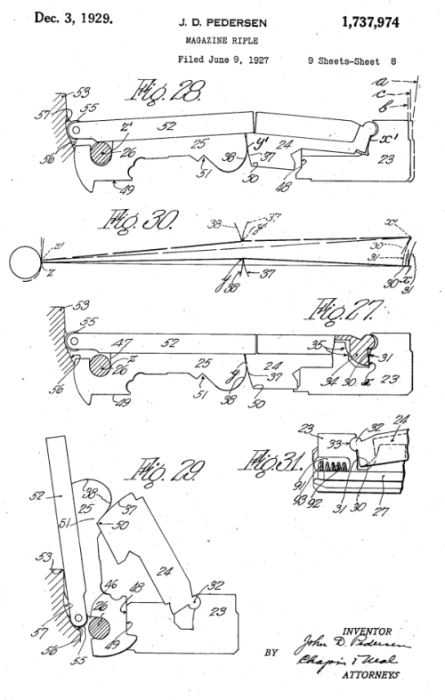 The Pedersen self-loading (semi-automatic) rifle was developed between 1926 and 1929 by prolific American small arms designer John Pedersen, under request from US Army. At the time US Army was interested in obtaining a new, semi-automatic infantry rifle which could replace old, manually operated Springfield M1903 rifle as well as Browning M1918 automatic rifle. Another request was to develop a new, lighter and less recoiling cartridge for the upcoming rifle. Pedersen commenced his work by developing a new cartridge, known as .276 Pedersen (caliber 7mm, metric designation 7×51). This cartridge was noticeably lighter and smaller than Army issue .30-06 (7,62×63) cartridge, while providing adequate range and lethality for use in infantry rifle. Once the cartridge was approved by US Army Board of Ordnance, rifle development program commenced with several designs competing against each other. Two most important rivals in these trials were John Pedersen with his delayed blowback operated T1 rifle and John Garand with his gas operated T3 rifle, both firing .276 caliber ammunition. Early tests were favorable to Pedersens' T3 rifle, and Britain, which closely watched US developments in the field of semi-automatic rifles, displayed noticeable interest in Pedersen design. Following this interest, British company Vickers-Armstrong Ltd manufactured unknown number (possibly close to one hundred) of rifles and carbines of Pdersen design, also chambered to fire .276 ammunition. However by 1931 the Garand rifle was ahead in the race in US trials, and by 1932 the Pedersen rifle completely fell out of favor of testing board, which clearly preferred the gas operated Garand design. In mid-1930s Pedersen rifles of domestic manufacture were tested in Japan. Chambered for Japanese standard 6.5x50SR ammunition, these weapons were made in very limited numbers and in two distinctive versions – a rifle with one piece wooden stock and rotary-type magazine with 10-round capacity, and a carbine with two-piece wooden stock and detachable box magazine with 5-round capacity. After some testing these rifles were rejected by Japanese army.

In general, probably the best part of the Pedersen rifle was its ammunition. The .276 (7mm) caliber cartridge was reasonably powerful, firing 9,7g (150gr) bullet at about 730m/s (2400 fps), producing about 2,580 Joules of muzzle energy. It generated noticeably less recoil than .30-06 and was lighter. However, it was killed in 1932 by decision of Gen.MacArthur to keep the .30-06 as the standard rifle and machine gun cartridge for US Armed forces. The Pedersen rifle itself was overly complicated, required lubricated ammunition to ensure reliable extraction, and the upon firing from prone position the opening toggle tended to hit the rim of the infantryman’s steel helmet, producing distracting effect.

The Pedersen T1 self-loading rifle employed delayed (retarded) blowback action with toggle-joint, similar to that used in Auatrian Schwarzlose M1907 machine gun. Upon discharge, the bolt head was pushed forward, forcing the delaying toggle to break up. The leverage in the toggle provided necessary retardation for the bolt opening while the pressure in the barrel was still high. However, bolt still moved back while pressure was high, even if at low velocity, so this potentially caused severe extraction problems due to the case stretching under pressure. Pedersen has solved this problem by applying a thing layer of dry lubricant to each cartridge case. This system worked satisfactory in trials, but it also caused some doubts. Rifle was fed by en-block clips, each holding 10 rounds of ammunition in two rows. Clips were inserted into integral box magazine through the top of the action, with bolt locked back by the bolt hold-open device. Empty clips were automatically ejected through the top of the action once the last round has been fired and bolt locked back. Rifle was normally equipped with wooden stock, fully adjustable aperture sights and a bayonet mount.