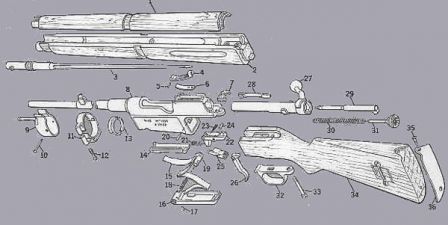 French army was among the first to adopt the smokeless rifle ammunition in the form of 8mm Lebel cartridge in 1886. By the early 1920s this rimmed cartridge became obsolete, so French began to develop a more modern, rimless cartridge, more suitable for proposed lightweight machine guns. By the 1924 French army had the new 7.5mm cartridge, but this proved to be unsuccessful, and by the 1929 the updated version of the 7.5mm ammunition has been adopted as 7.5mm Cartouche Mle.1929C (7.5x54mm). By the same time, French also developed a lightweight machinegun, the MAC 1929. Initially, French tried to convert earlier 8mm Berthier rifles for new ammunition, but it was apparent that the new rifle is desirable for French infantry. In 1936 French military officially adopted the MAS Mle.1936 (MAS-36) bolt-action rifle, developed by the Manufacture D'Armes de Saint-Etienne. Later on, French forces adopted the modified paratrooper's version, known as MAS-36 CR 39. This version differed from basic rifle by the aluminum buttstock, which can be folded down and under the forend. This rifle served with French armed forces until the semi-automatic MAS-49 and MAS-49/56 replaced it in service during 1950s and 1960s. The MAS-36 rifle was in production up until the mid-1950s. The MAS-36 action also served as a platform for FR F-1 and FR F-2 sniper rifles, which are still in service with French Armed forces. Since 1951, some of MAS-36 rifles were converted or made into MAS-36/51 pattern, by adding the permanently attached grenade launchers and rifle grenade sights. Grenade launcher was attached to the muzzle of the gun, and was used to launch rifle grenades using special blank ammunition. Folding grenade sight was attached to the left side of the front sight base.

MAS-36 is a manually operated, magazine fed, rotating bolt action rifle. The rotating bolt has two opposing lugs, located at the rear of the bolt body. The bolt locks into receiver walls, the bolt handle is located at the rear of the bolt, and is bent forward for more comfortable operation. The square-shaped receiver is machined from steel, and contained integral magazine. Magazine is loaded using charging clips or single rounds, with clip guides machined into the receiver bridge. The wooden stock is made from two parts (buttstock and forend), both connected to the uncovered receiver. The spike-shaped bayonet is stored in the tube below the barrel in reversed position, when not in use. Diopter rear sight is located at the rear of the receiver, and marked from 100 to 1 200 meters in 100 meters increments. Probably the most noticeable feature of the MAS-36 is the lack of any manual safety – rifle was supposed to be carried with empty magazine, and loaded only before the actual combat.