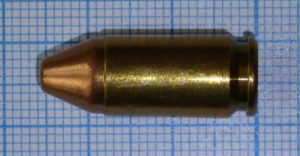 This cartridge started its life under the name of “9mm Ultra” during mid-thirties as an experimental joint development of the GECO and Carl Walther companies, both from Germany. This development represented an attempt to create a cartridge powerful enough for military and police purposes, yet suitable for a relatively compact and simple blowback-operated pistol. GECO produced experimental ammunition, and Walther made several prototype pistols, but at that time development never went any further. However, during the early seventies this cartridge was revived as the “9mm Police” in an attempt to provide German police with weapons more effective than the then-available pistols chambered for 7.65mm Browning and 9mm Kurz. Several police-type pistols were made for this cartridge in Germany and Italy, and ammunition was produced by Hirtenberger in Austria. However, German police authorities finally decided to use the more potent 9×19 Luger ammunition, and the 9×18 Police soon went into oblivion.

The 9×18 Police and Ultra rounds are similar except for headstamps; both have straight, rimmed cases made of brass, and usually are loaded with a jacketed bullet of truncated cone shape.

NOTE: This cartridge must not be confused with Russian 9×18 PM / Makarov load.