Pz.B.39 antitank rifle, with spare ammunition box attached to the gun. The pistol grip is dropped down to open the breech for reloading. 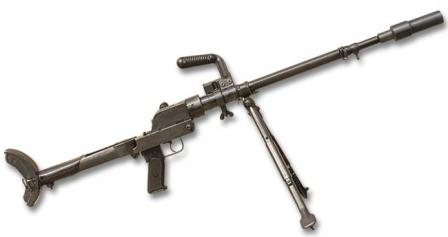 Based on their WW1-era experience with T-Gewehr anti-tank rifle, in late 1930s German army initiated development of the similar weapon. The first "Hitler's anti-tank rifle" was so called Panzerbüchse Modell 1938 or Pz.B.38 in short, which translates to "Tank rifle, model of 1938". It was developed and produced at Gustloff werke, using newly developed rifle-caliber high-velocity ammunition, known as 7.92mm Patrone 318 (14.3 gram AP bullet at 1210 m/s). This ammunition was usually loaded with steel-cored (SmK) bullet, although AP-Tracer and AP-Chemical loadings also were produced in this caliber. Less than 2 thousands of the PzB-38 rifles were built in following 2 years when it was discovered that it was too heavy and too complicated, and a simplified and lightened version was requested. It was adopted by 1940 as PzB-39, and slightly less than 40 000 of these guns were delivered to Wehrmacht (Hitler's army) in 1940-41. Following the widespread use of Soviet T-34 tanks, whose armor was well beyond capabilities of PzB-39, many of these rifles were converted to grenade launchers by cutting the barrels down and installing cup-type muzzle launchers. Such launchers were known as GrB-39, and fired various grenades using special blank cartridges.

The PzB-38 antitank rifle is a single shot, manually loaded rifle. It uses vertically sliding breechblock, which is dropped down to open the barrel for reloading, and then rose up for locking before fire. The barrel and breech are allowed to recoil against the buffer in the stock. This recoil movement helps to decrease peak recoil which is felt by the shooter. It is also used to drop the breechblock automatically and eject the spent case. The fresh cartridge is then loaded into the barrel by hand, and the breech closed through the push on the charging handle, which is located to the right of the breech. The same handle also can be used to drop (open) breech manually, by pulling it to the rear. Rifle is equipped with conical flash hider, folding tubular buttstock and a bipod. To facilitate faster reloading in combat, two ammunition boxes can be attached to either side of the receiver, each holding ten rounds, ready to be picked up by hand and loaded into the gun.

The PzB-39 antitank rifle has similar layout but much simplified design. Barrel recoil and automatic ejection features are discarded, and the vertical movement of the breech block (down to open, up to close) is controlled by tilting pistol grip. To open the breech, operator has to unlock the pistol grip and tilt it down and forward. Once empty cartridge is ejected and fresh one is loaded, operator has to pull the pistol grip back and up until it locks in place. The barrel is fitted with muzzle brake. For transportation, tubular buttstock folds to the right, and a carrying handle is provided on the barrel. Folding bipod is attached to the front of the stock.PzB-39 antitank rifle was equipped with fixed iron sights, zeroed for 400 meters range.