I have held a lifelong interest in firearms. For me, this began at age of about 8, when I got my first illustrated book about guns, written and drawn by famous Russian writer Zhuk. This interest grew over the years, until it reached entirely next level in late 1999.
For the past twenty years, I’ve been committed to sharing my research in these fields with the wider world. That is how the Modern Firearms website (formerly known as World Guns, hosted at world.guns.ru) was born. I have also been passionate about sharing information about Russian and Soviet weapons with an international audience, and have worked on the Russian and English versions of the site in tandem. I also wrote several gun books and many magazine articles, both in Russian and English.
I have been humbled by the interest in my person project. I am delighted to be able to report that, since I began, more than 170 million visitors have graced this site with more than 1 billion page views. That number is hard for me to appreciate, and I am grateful to all of my readers and supporters. 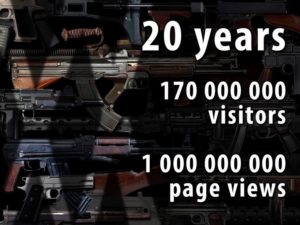 Today, on the 20th anniversary of the Modern Firearms website, I am excited to announce my most ambitious project to date. The Story of the Russian Avtomat: Fedorov, Kalashnikov & Beyond will trace the history of automatic infantry rifles in Imperial Russia, the Soviet Union, and the Russian Federation, from pre-WWI to present day. Understanding firearms goes beyond an analysis of their mechanical characteristics and practical merit; it is essential to examine their design, development, and history. It is my hope this book will become a standard reference work on the topic, and will provide an easy starting point for those interested in exploring Russian small arms in greater depth than is commonly available in English.

The book will cover the following weapons in detail:
· Fedorov Avtomat
· AVT-40 & AS-44
· AK-47 prototype rifle and its competitors, such as the AB-46 and TKB-408
· AK, AKM, and AK-74 production weapons and variants
· Experimental weapons, as the Korobov TKB-022, Nikonov prototypes that led to AN-94, and much more
· Special purpose weapons, such as the APS underwater rifle and suppressed guns in 9 × 39 mm
· Modern automatic rifles, including the AK-100 series, AK-12, and AM-17

The book will be published by Headstamp Publishing, a company that I believe produces the best firearms books available anywhere in the world. With the support of their editorial and design teams, I have no doubt this will be a beautiful and engaging volume.

To find out more about this upcoming release and to be notified when pre-orders open, please sign up for the Headstamp Publishing mailing list. That list will be my primary means of communicating information about this book.

Thank you—all of you—for your support over this past twenty years. Here’s to many more to come! 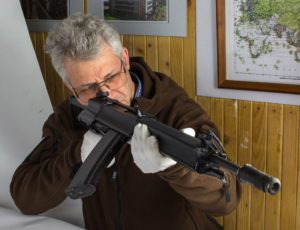