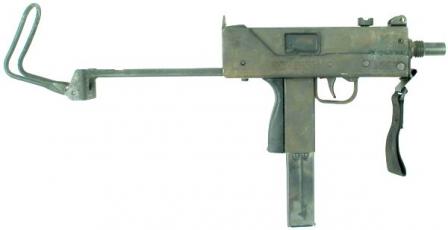 Ingram M10 in .45ACP caliber, as made by MAC, with stock extended. 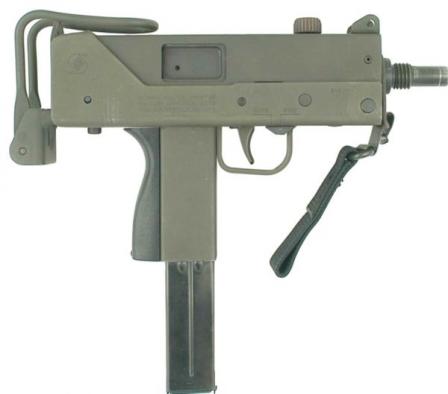 ┬ĀIngram M10 in 9x19mm caliber, as made by MAC, with stock retracted. 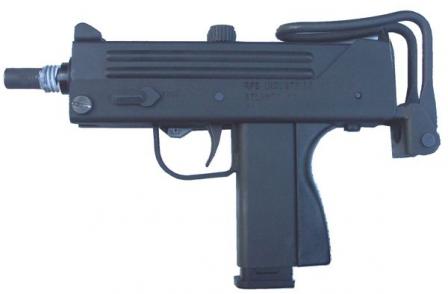 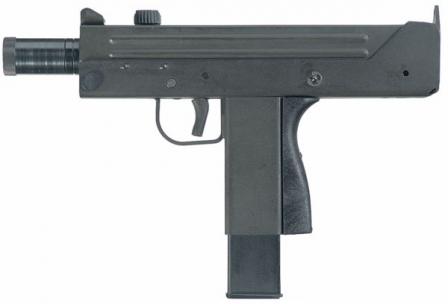 The Ingram MAC 10 was designed by Gordon B. Ingram, an American arms designer.┬ĀHe had┬Āpreviously developed several submachine guns under his own name (such as the┬ĀIngram Model 6), and began work on a more compact submachine gun, suitable for clandestine operations, in around 1964.

Several prototypes were made by Ingram by 1965, and in 1966 at least one prototype gun was purchased by the┬ĀUS Army for testing and evaluation. In around 1969 Ingram joined the Sionics Company, which previously manufactured silencers for small arms.┬ĀSionics then┬Āstarted tooling up to produce Ingram submachine guns. In 1970 Sionics was incorporated into the larger company Military Armament Corporation (or MAC┬Āfor short), located in Powder Springs, Georgia, USA.

That same year the MAC company commenced production of two versions of Ingram submachine guns – the larger Model 10 (M10), chambered for 9×19 or .45ACP ammunition, and the┬Āsmaller Model 11 (M11), chambered for 9×17 (9mm Short or .380ACP). Either version was available with silencers, developed by Sionics / MAC. The MAC company closed in 1976, and manufacturing rights for Ingram M10 and M11 submachine guns were transferred to RPB Industries Inc, located in Atlanta, GA.

later on, submachine guns and semi-automatic only “pistols” and carbines, based on the original Ingram design, were┬Ā manufactured by several more companies, such as SWD Inc, Cobray, and others. Copies of the M10 were also manufactured in Taiwan and Japan.

Some original weapons were sold to Chile and Yugoslavia during the┬Āearly 1970’s; later on, there were sales to some Asian and South American countries.

Ingram Model 10 and Model 11 submachine guns were intended for close encounters and for concealed carry. Several versions of M10 were made with longer barrels, including rare “carbine” version with an extended┬Ābarrel being about 450mm (18″) long, and partially enclosed into a perforated barrel jacket.

The “civilian” clones of Ingram models were made in a great variety of modifications, with minor differences in almost every detail. Cobray 9mm M11 “pistols”, for example, were based on experimental submachine guns developed at RPB Indusries in around 1979; these guns had the longer receivers necessary to increase bolt travel and thus decrease the rate of fire. In semi-automatic versions this feature is obviously irrelevant.

The Ingram Model 10 (MAC 10)┬Āis a blowback-operated, selective-fire submachine gun, that fires from an open bolt. The bolt has the firing pin milled into its body (or else pinned to it). The bolt is of telescoped design, with most of its weight located in front of the breech face, around the barrel (wrap around bolt).

The cocking handle is located at the top┬Āof the gun, and can be used to lock the bolt in forward position, when the┬Āhandle is turned sideways 90 degrees. The receiver is made from formed sheet steel and consists of two┬Āsections – upper and lower. Receiver┬Āsections are connected by a steel pin at the front of the weapon. The charging handle is located at the top of the receiver and doesn’t move with the bolt when firing. The muzzle of the barrel is threaded to accept a┬Āsilencer (suppressor).

Shoulder stock was of telescoped design with a folding shoulder rest made of steel wire. To provide additional stability, a leather loop is┬Āattached to the front of the receiver, used to hold the gun by the non-firing hand.

Sights are of the┬Āmost simple type, and include a non-adjustable diopter type rear and protected front blade.