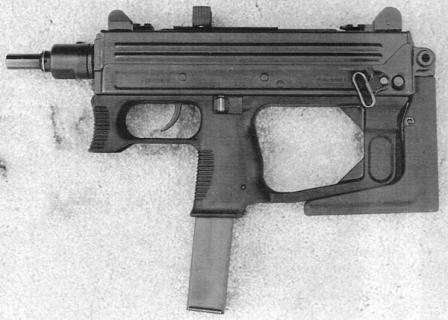 The Ruger MP9 submachine gun was designed as a compact weapon for law enforcement forces. It is based on basic design of the Uziel Gal (author of the UZI SMG), further improved by the Ruger company.The MP9 was released in 1995 for police and military sales in the USA.

Basically, MP9 may be called "improved UZI". Main improvements over the Uziinclude following: the blowback operated action is redesigned to be fired from the closed bolt, to increase accuracy; the lower receiver with integral pistol grip is made from Zytel polymer, while the upper receiver is made from stainless steel; the buttstock is redesigned, and is of folding / telescoped design. MP9 submachine gun features three positions safety / fire mode selector with "safe", "semi-auto" and "full-auto" positions, as well as a separate firing pin block to increase safety. The quickly detachable barrel is loaded with spring to cushion the impact of the bolt on closure. The cocking handle is located at the top of the receiver.