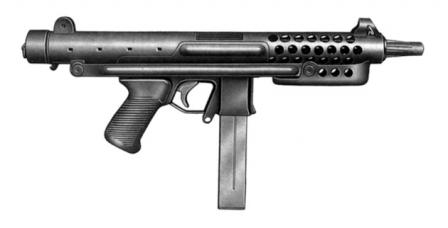 The Star Z62 submachine gun was developed by STAR Bonifacio Echeverria SA company of Spain circa 1962, and was adopted by Spanish army, police and Guarda Civil in 9mm Largo. For export it was offered in more common 9mm Luger/Parabbelum chambering. In the 1971 Star company came with updated version of Z62, called Z70b. This gun had minor modifications, described below, and also was manufactured in 9mm Largo for Spanish service and in 9mm Luger for export. In Spanish army it was replaced in mid-1980s by the Star Z84.

Star Z62 is a conventional blowback operated, selective fire submachine gun. The tubular receiver in its front part also acts as a heatshield, the cocking handle is located at the left side and does not move when gun is fired. The firing pin is mounted within the massive cylindrical bolt and is operated by lever, which protrudes from the bolt and moves the firing pin off the bolt face only when bolt is its forwardmost position. Another intersting feature is a two-finger trigger, which also acts as a fire selector, depending on what part of the trigger (upper or the lower) user pressed. The safety was of cross-bolt type. The metallic buttstock folds under the gun when not in use and can be used as a handguard. Rear sight has flip-up “L”-shaped blade with two settings, for 100 and 200 meters.

Z70b is in most aspects similar to the Z62, but it utilises more conventional safety / fire selector switch above the triggerguard and a conventional trigger, and also has magazine catch of different type.