FN PS90 – a civilian semi-automatic only version of P90 with elongated barrel.

Bottom view on a full FN P90 magazine, showing the position of the stored cartridges and cartridge in feed position. 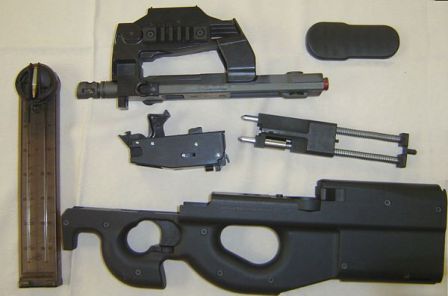 The FN P90 Submachine Gun (SMG) was developed in the late 1980’s as a personal defense weapon. It was intended for troops whose primary activities did not include small arms, such as vehicle and tank crew members, artillery crews etc. Standard pistols and submachine guns chambered for pistol rounds had proven ineffective against enemy soldiers wearing body armor. Therefore FN designers first developed a new round with enhanced penetration, initially known as SS90. To achieve the necessary high penetration while keeping the recoil impulse low, FN used a small-bore approach, creating a round that looked much like a scaled down 5.56 NATO round. It must be noted that similar concepts were tried in other countries, most notably in the USA, several decades before FN. For example, the US Army tested M1 carbines chambered for the .221 Johnson Spitfire round back in the late 1950’s. Later on, Colt produced its .22 SCAMP and 5.6×30 MARS ammunition for the special SCAMP machine pistol and MARS “mini assault rifle” (a scaled-down M16 rifle) respectively. It must be noted that the 5.6×30 MARS round was in a sense a direct predecessor to the 5.7×28 FN SS90 round, although the latter featured a slightly lighter and faster bullet.

By the late 1980’s the concept of a small-bore, low-impulse “personal defense weapon” (PDW) with good accuracy and lethality at ranges of up to 200-250 meters was well established, although there were no weapons adopted for service yet. FN decided to follow this concept and create its own PDW using a “clean sheet” approach. Basic ideas used for this development, designated as ‘Project 9.0’, included the following:

To save on size and weight, the FN designers put the  new weapon into a compact and lightweight stock of bullpup layout, made of impact-resistant polymer. The high-capacity magazine was also made from semi-translucent polymer, and holds 50 rounds in two rows.

To further make the loaded weapon as compact as possible, FN designers followed the idea of American designer Hall, and placed the magazine above the barrels, with cartridges stored in horizontal position with bullets at 90°. While the Hall system employed a rotary feed unit, operated by the bolt, to put new cartridge in line with the barrel, FN designers incorporated a stationary helical ramp into each magazine, which rotates the cartridge 90° prior to passing through the feed lips.

Complete ambidexterity was achieved by using duplicate controls (including dual charging handles and dual back-up open sights), and bottom ejection. Finally, simplicity of aim was achieved by the use of an integral reflex type collimating sight and integral laser aiming module (LAM).

The resulting weapon appeared in 1990 as the FN P90 Personal Defense Weapon. This was alongside the improved 5.7×28 SS190 ammunition, replacing polymer-cored bullets with heavier dual-core (steel / aluminum) bullets giving better penetration against body armor. Several other types of ammunition were developed for this weapon, including tracer, subsonic ball and soft-core training ball.

The first sales of P90 were made to Saudi Arabia in the early 1990’s. Today it is believed that FN sold more than 20 000 P90’s to a wide variety of law enforcement agencies and military special operation units worldwide, including the US Secret Service, Austrian Army rangers, Dutch BBE Special Operations Forces, the Belgian Army among others. Most interestingly, the adoption of the P90 so far has generally been in direct opposition to what was originally intended: That of a “personal defense weapon”. In fact, most services and   various agencies use it as an offensive weapon, as a specialist or even primary weapon for various assault teams. Also other “professional small-arms users”, as opposed to military personnel whose primary functions do not include the use of small arms.

In around 1995 FN supplemented the P90 with a pistol design, firing the same 5.7×28 ammunition, designated as the FN Five-seveN. Recently, FN also introduced a civilian version of the P90, designated as the PS90 carbine. This is a self-loading weapon with a longer barrel (408 mm / 16″).

The FN P90 personal defense weapon is a blowback operated, selective-fire weapon which fires from a closed bolt. The firing is controlled by a removable trigger unit with conventional hammer. A manual safety is located directly below the trigger. As mentioned, the magazine lies at the top of the weapon, feeding from front-to-back, with spiral ramp built into the “rear” part. Spent cartridges are ejected straight down through the chute, which exits just behind the pistol grip.

The standard sighting equipment includes a non-magnifying collimating sight with “ring and dot” illuminated aiming reticule. Back-up open sights are provided at either side of the primary collimating sight. The so-called P90 USG version is provided with two additional Picatinny rails at either side of the collimating sight base; FN also offers a version with no standard sighting equipment. The user has to make their own choice of day and/or night sights and additional equipment, which can be installed on the three Picatinny rails – top, left and right. This version is designated as P90 TR (triple rail). The front part of the forward handgrip on P90 is shaped as a hand protector, and it can contain an integral laser aiming module, which sends either a visible or IR laser beam to mark the intended target. For special missions P90 can be fitted with a special suppressor, which is used in conjunction with subsonic ammunition.