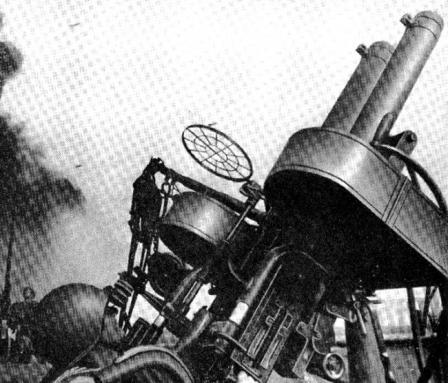 The M2HB Browning Heavy machine gun –  “Ma Deuce”, is the result of the development of a large-caliber heavy machine gun in the USA, initiated in 1918. This was at the direct request of General Pershing, the commander of the US expeditionary corps in Europe.

He requested a heavy gun capable of destroying military aircraft and ground targets such as tanks and armored cars. The task of developing such a gun and the ammunition to go with it was passed to John Browning (then based at Colt’s factory) and the Winchester Arms Co. respectively.

The basic pattern of the new heavy machine gun was sealed in 1921. Officially adopted in 1923 as “Machine Gun, .50 Calibre, M1921”, this water cooled, belt fed gun became the prime AA weapon for the infantry and the navy.

In the year 1930 the US Army adopted a slightly modified .50 caliber M1921A1 machine gun, and further work on this gun concentrated on the development of a universal weapon suitable for most roles. The key design changes were made by Dr. Samuel G. Green, who redesigned the basic receiver so it could be used in conjunction with either water-cooled or air-cooled barrels, encased in a water jacket or short perforated sleeve respectively. He also developed a switchable left or right side belt-feeding unit. The US Army adopted the new, improved fifty-caliber machine gun as the M2, in a water-cooled anti-aircraft version, an air-cooled ground mount version and as an aircraft weapon.

Since the original air-cooled barrels were too light to provide any degree of sustained fire in ground applications, heavier barrels were soon introduced for the ground-mounted guns, so this weapon became the“M2 Heavy Barrel” or M2HB for short. In 1938 the barrel of the M2HB was lengthened to provide more striking energy and longer range, and in this form the M2HB was made in great numbers during the Second World War.

US arms factories turned out a little less than 2 million M2 guns in all versions between 1941 and 1945, of which over 400,000 were made in M2HB configuration for ground use.

After the end of WW2, .50-caliber Browning guns found a wide acceptance across the world, and today are still prolific as ground and vehicle guns in most of the NATO countries and many others as well. Production of new M2HB guns continues in the USA and in Belgium.

The Browning M2HB machine gun is a belt-fed, air-cooled machine weapon capable of semi-automatic and automatic fire. The M2HB fires from a closed bolt at all times, and uses a short-recoil operated action with a vertically sliding locking block, which rises up to lock the bolt to the barrel extension, and drops down on recoil to unlock the bolt from the barrel.

It also has a bolt accelerator, made in the form of  a lever located at the bottom of the receiver. Upon recoil, once the barrel is unlocked from the bolt, it strikes the accelerator, so the kinetic energy of the recoiling barrel is quickly transmitted to the bolt, improving the reliability of the weapon. Barrels are screwed into the barrel extension and are not quick-detachable on standard M2HB weapons. Furthermore, once the barrel is installed in the weapon, the headspace must be adjusted prior to firing, or the weapon may fail to fire or produce a serious jam.

However, quick change barrel (QCB) kits were developed by several companies during the 1970’s and 80’s and every M2HB weapon can be converted to a QCB version with the replacement of only a few parts, including the barrel.

The rear part of the barrel is enclosed in a short, tubular, barrel jacket with cooling slots. The back of the receiver houses a bolt buffer, and an additional buffer is used to soften the movement of the heavy barrel.

On infantry guns, the cocking handle was invariably installed on the right side of the weapon. Slots were made on both sides of the receiver for tank installations which may require a left-sided cocking handle.

Browning M2HB machine guns use a disintegrating steel belt, with the feed switchable from one side to the other through the re-installation of certain parts in the feed unit. The belt feed is of the two stage type– every cartridge is first withdrawn from the belt toward the rear by the pivoting extractor lever, attached to the bolt. Once the cartridge is clear of the belt, it is lowered into a T-slot cut into the bolt face, and pushed forward into the barrel. Spent cartridge cases are forced down the T-slot and out of the weapon through an opening at the bottom of the receiver by the following cartridges, or by the pivoting belt extractor lever (for the last cartridge case). A rotary switch is used to select the track for left or right side feed.

Since the gun fires from a closed bolt, it has a separate firing pin, powered by its own spring, and hosted inside the bolt along with the sear and cocking lever. Upon the recoil stroke of the bolt, the cocking lever pulls the firing pin back until it is engaged by the sear. Once the bolt is fully in battery (locked closed), a pull on the trigger raises the trigger bar so that it acts on the sear and releases the firing pin.

The standard firing controls consist of a push-type thumb trigger and sear release buttons located between the dual spade grips. Alternately, an electric solenoid trigger can be installed for mounted vehicle applications.

The M2HB has an unusual method of providing semi-automatic fire (probably added to the basic design as an afterthought) – it has a bolt latch, which locks the bolt to the bolt buffer in the open position after each shot. Therefore, if the gun is fired in semi-automatic mode (single shots), for each shot the operator must first release the bolt forward by pressing the bolt latch release, located next to the thumb trigger. After the bolt is released and the gun is loaded, the operator may push the trigger to fire a single bullet.

If automatic mode is desired, the bolt latch must be turned off and locked by turning its lock to the left. In this position it will not engage the bolt and the gun will fire continuously as long as the trigger is pressed. It must be noted that the original M2HB guns had no manual safeties. However, the recent M2E2 upgrade developed by General Dynamics, includes among other items, an additional manual safety located next to the trigger.

Standard sights consist of a folding blade front and frame-type rear. The rear sight is mounted on the receiver. The front sight is located at the front of the receiver and protected by an arc-shaped sight protector. Additionally, various types of telescopic and night sights can be installed by using the appropriate mountings.