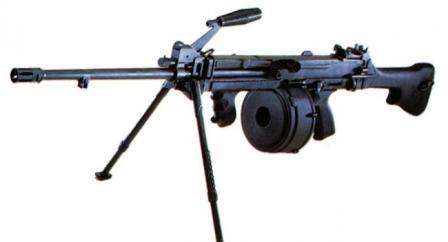 Ultimax 100 Mk.3 machine gun in "assault" configuration, with shortbarrel, folded bipod and no butt. Magazine is not shown.

In 1978, an American small arms designer James Sullivan, a man who previously worked for Armalite and participated in design of the AR-18 assault rifle, traveled to Singapore. There he joined the small arms design team at Chartered Industries of Singapore(CIS; now Singapore Technologies Kinetics) Inc, with task to design a squad automat weapon / light machine gun that could serve as a companion to the assault rifle then in development at the same company. After about four years of development and trials, Singaporean army adopted the new squad automatic weapon, known as Ultimax 100, in 1982.
Ultimax light machine gun was produced in three subsequent versions (Marks), with fourth being evaluated in USA at the time of this writing (autumn 2007). The current production version is Ultimax 100 Mark 3, which is described below.Other versions are as follows: Ultimax 100 Mk.1 was a pre-production variant.Ultimax 100 Mk.2 was the first production gun, with fixed (non-detachable) barrel and a folding carrying handle located above the center of the mass of the gun. Production ceased by late eighties, with introduction of the Ultimax 100 Mk.3.Ultimax 100 Mk.4 is an updated version of Mk.3, developed for US Marine Corps “Infantry Automatic Rifle” competition. It features an updated barrel with M16A2-style flash hider, Picatinny rails on top of receiver, optional for end with additional Picatinny rails on 3-, 6- and 9-o’clock positions, and a quick-detachable magazine adaptor for unmodified M16 (STANAG) magazines. The new buttstock is of skeletonized design and folds to the side. The trigger / fire control / pistol group is a modular unit, which can produce a variety of firing modes including single shots, three-round bursts and full-automatic fire.

Ultimax 100 Mk.3 is gas operated, air cooled, magazine fed weapon. Ultimax 100 Mk.3 has quick detachable barrels, equipped with carrying handle to assist hot barrel removal. Each gun is supplied with two barrels, and additional barrels of standard (508 mm) or short (330 mm) length can be obtained from manufacturer (latest versions also available with optional 267 mm “VIP Protection” barrel).
Gun is gas operated, utilizing short-stroke piston gas system, located above the barrel and fitted with manual gas regulator that has five settings. Barrel is locked using rotary bolt with multiple radial lugs. The patented “constant recoil” action is in fact a simple effort to avoid the heavy bolt group slamming against the backstop in receiver. This is done by elongating the stamped-steel receiver (and available bolt travel path) and by carefully calculating the strength of return spring.
Feed is from detachable magazines only, using either proprietary 100-round drum magazines or slightly modified 30-round M16-type box magazines (modification involves an additional lock holes for Ultimax magazine catch). Drum magazines are made mostly from plastic, with translucent rear wall which permits easy check of available ammunition. Original intent was to make these drums disposable but currently these are reusable. Ejection of spent cartridges is to the right side, and ejection port is covered by spring-loaded dust cover.
Firing controls include a pistol grip and a conventional rifle-type trigger; ambidextrous safety / fire selector levers are located at either side of receiver, above the pistol grip. Gun fires from open bolt only, in semi-automatic or full automatic modes.
Standard furniture includes a lightweight folding bipod, attached to the gas block, short polymer forend with forward pistol grip, and a removable plastic butt (gun can be safely fired with butt removed). One somewhat unusual accessory for Ultimax 100 is a bayonet lug on the barrel, which permits attachment of a standard M16-compatible bayonet.