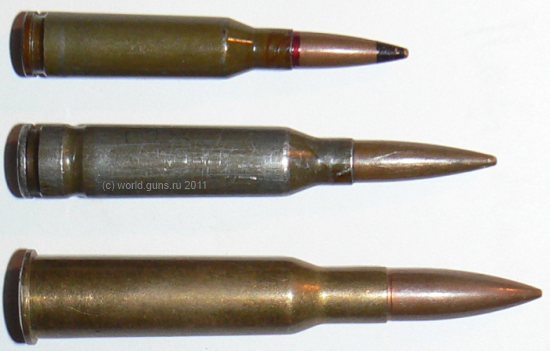 6 mm “Unified” machine gun was developed during late 1980s and early 1990s in USSR (and later in independent Russia) as a possible replacement for venerable Kalashnikov PKM general purpose machine gun. It was designed at TSNII TochMash in the city of Klimovsk, located near Moscow, which is a Government-owned research and manufacturing organization responsible for small arms and ammunition development. “6mm unified” program commenced as an attempt to replace more than a century-old 7,62x54R rifle / machine gun cartridge with more modern round of ammunition, which would provide longer effective range, less  weight and recoil, and simpler design of the guns, due to its rimless case design. After significant research, developers at TSNII TochMash produced a 6×49 ‘Unified’ cartridge, which had rimless bottlenecked cartridge made of steel, and was loaded with pointed bullet weighting 5 gram. This cartridge was rather hot-loaded, delivering muzzle velocities in 1100-1150 m/s range (3,600 – 3,770 fps). Weapons, designed  for this round, included at least two new sniper rifles and one machine gun, which is described below. It is believed that several 6mm Unified machine guns were built by TSNII TochMash before financial issues, caused by dissolution of the Soviet Union, put the whole “6 mm Unified” program to an end during mid-1990s. According to the manufacturer, the 6mm Unified MG had effective range of up to 1,500 meters and was almost twice as accurate, compared to standard Kalashnikov PKM machine gun.