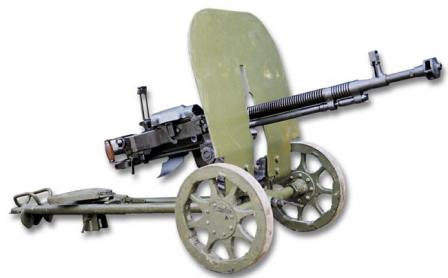 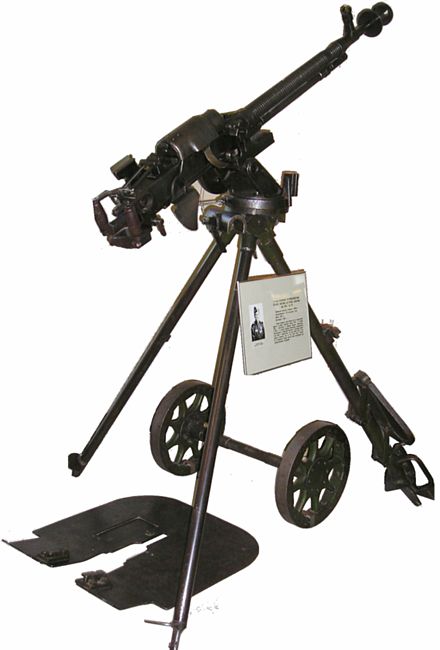 DShK heavy machine gun in AA configuration, with shield and wheels removed, and tripod extended. Muzzle brake is of early (original) style.
The particular gun on photo is from museum collection in St.Petersburg and itwas used to shoot down several German airplanes during the Great patriotic war of 1941-45. The plate on tripod shows the gunner (with war decorations) and tells the story of the gun.

Post-warDShKM with the shield discarded. Note the flat belt-feed unit.

Post-warDShKM mounted on a Soviet tank.

In the 1925 the Red Army requested the development of a large caliber machine gun, with the intention of using it as an anti-aircraft and anti-armor weapon. First, an indigenous round of 12,7mm caliber was quickly developed. Unlike the standard Russian 7.62mm rifle round, thenew 12.7×108 round had a rimless case and was generally similar to the American .50caliber Browning Machine Gun round, although the Soviet round hadsomewhat longer case.By the year 1930 Degtyarov developed what was basically an enlarged  DP-27 machine gun, known as DK(Degtyarov Krupnokalibernyj– Degtyarov large caliber). This was a large, gas operated, air cooled weapon that used a top-mounted magazine feed, with 30-round detachable drum magazines. DK machine guns were put into limited production by 1933, and used on certain armored cars, light tanks, and smaller naval and riverine vessels.However, the heavy 30-round drum proved to be unsatisfactory in service, and by 1938 the gun designer Shpagin developed an‘add-on’ belt feed unit for the DK. The modified DK with belt feed passed the usual trials and was subsequently adopted asDShK-38(Degtyarov – Shpagin Krupnokalibernyj – Degtyarov& Shpagin largecaliber, model of 1938). While the DShK was a satisfactory weapon with reasonable power (at least to deal with low-flying aircraft and lightly armored vehicles), it had some peculiar properties, of which the most notable was the very heavy universal wheeled mount, which, despite its weight, could not provide the necessary gun stability and vibration dampening for accurate long range fire.During the immediate post-war period DShK went through modification program, and also experienced a long service life as the DShKM 1938/46, both in Soviet Union and in so-called ‘Soviet satellite’ countries, as well as in many other Asian and African countries.Copies of DShK were built in Czechoslovakia, China, Iran and Pakistan.Pakistanis the only country which still produces guns of the DShK / ChineseType 54 pattern.

The DShK is a gas operated, belt fed, air cooled machine gun that fires from an open bolt and in automatic mode only.The gas piston and chamber are located below the barrel; the gas piston is of the long stroke type, and is attached to the bolt carrier. The gas chamber is fitted with a gas regulator, which requires a special wrench to make adjustments. The bolt, of generally rectangular cross-section, locks into the receiver with two outwardly pivoting flaps. These flaps are pushed outwards from the bolt to lock it by the enlarged firing pin, which in turn is operated by the vertical projection on the bolt carrier. The rear of the receiver houses two spring buffers, one for the bolt and one for the bolt carrier.
The heavy barrel is finned for better cooling, and is fitted with a large muzzle brake. The barrel can be detached from the weapon, but it hardly can be called “quick detachable”; it is screwed into the front of the receiver, and then fixed there by the cross-bolt,which is also screwed in place.
The ammunition feed is via non-disintegrating steel belts, from the left side only. The belt feed unit was designed as an afterthought for the originally magazine-fed DK machine gun, so it is clamped to the top of the receiver. It consists of a squirrel-cage type wheel which is operated by a swinging arm at the right side of the gun. This arm, in turn, is operated by the reciprocating round projection, which is located on the right side of the bolt carrier. The belt enters the circular feed unit at the top, and cartridges are carried clockwise(when looking from the rear of the gun). Upon discharge, the bolt carrier goes back on its recoil stroke, pulling the belt feed hand and rotating the feed wheel by 1/6th of a turn. Upon rotation, the belt is pulled across the unit, and cartridges are stripped down from the belt pockets by dual claw-shaped strippers. Once the cartridge reaches its bottom position in the feed unit, it is stripped forward into the chamber by the bolt.On DShKM guns, belt feed uses simplified slider-type belt traction unit, also powered through the swinging arm, and somewhat similar in design to the feed of the RP-46 gun. Spent cartridges are ejected down through openings in the receiver and bolt carrier.
In manual (ground and AA) applications gun is fitted with dual spade grips at the back of the receiver, and a dual trigger. Charging handle is also shaped as a spade grip, and is located horizontally below and between spade grips.
Standard sighting equipment is an open sight adjustable for range (up to 3500 m in 100 m increments) and windage. Additional anti-aircraft sights can be installed for AA use.
The standard mount is an universal setup, which can be used for both ground and AA roles. Designed by Kolesnikov, this mount consists of a detachable two-wheel base and three folding legs, which form the tail-boom for ground applications and are extended to form a tripod for AA applications. Kolesnikov mounts were issued with heavy armored shields, but crews often discarded shields to save some weight and to decrease the gun profile when firing from wheels. In the AA role, both wheels and shield were detached from the mount, and an optional shoulder support can be installed.