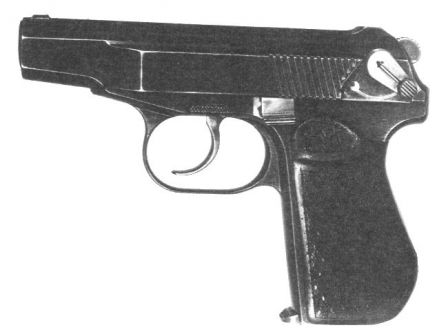 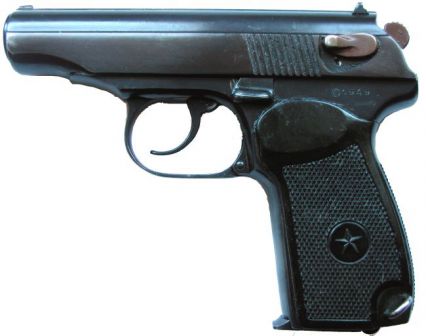 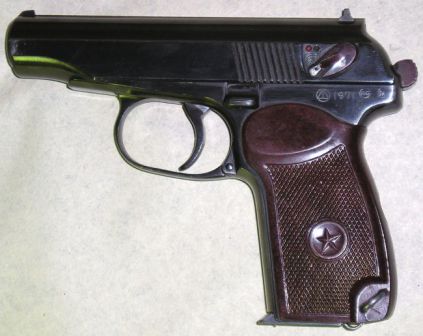 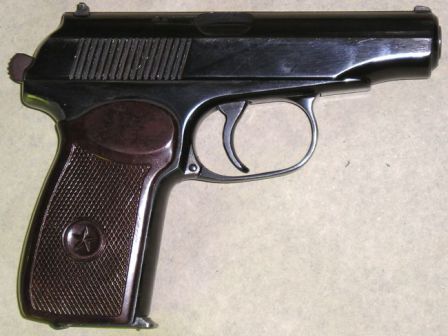 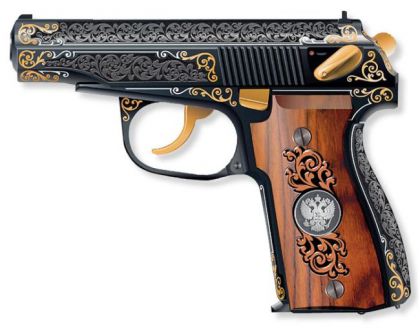 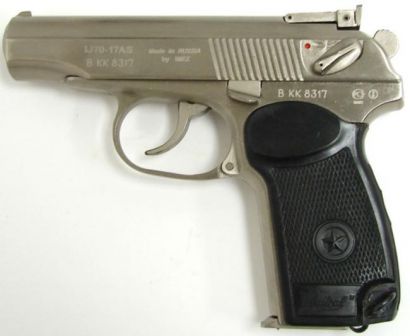 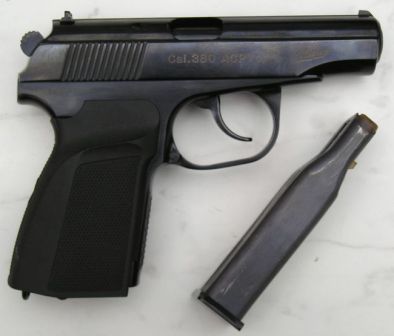 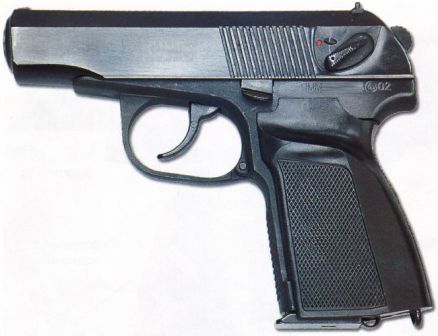 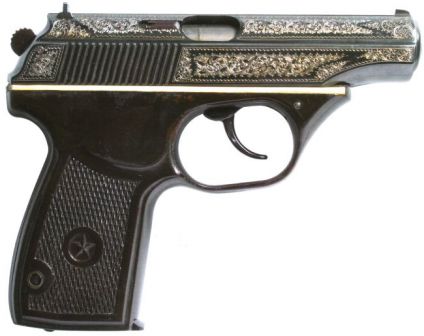 Experimantal TKB-023 pistol with polymer frame, a prototype based on Makarov PM pistol (circa 1965) 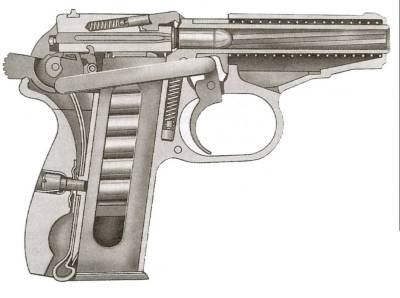 The Red Army fought the Great Patriotic War of 1941-45 with both the semi-automatic Tokarev TT pistols and the obsolete Nagant M1895 revolvers. Despite the fact that more potent pistols were designed just before and during the war, the TT remained the mainstream weapon. Wartime experience, which included a close (and sometimes very personal) familiarity with German pistols, resulted in a major change of thinking about the role and necessary features of a military pistol for the Soviet army. Another factor that played a major role in the development of new requirements for the next military pistol, was the realistic prospect of a Third World War, with massive nuclear bombing and other such large-scale actions; as a result, pistols played a very minor role in both strategic and tactical doctrines of the Soviet Army. Furthermore, Tokarev pistols, despite being relatively simple and powerful, showed significant deficiencies, some of them quite serious, such as the lack of positive safety, so almost immediately after the war the GAU (Glavnoye Artillerijskoe Upravlenie – General Artillery Department of General Staff) issued a new set of requirements for a military and police pistol.
These requirements asked for a compact, double action pistol of the “Walther PP type”. New pistols were to be submitted in three calibres – 7.65x17SR Browning (proposed police round), 9×17 Browning, and a new 9×18. The last of these had been initially developed just prior to the war and refined after the war by the designer Syomin. Apparently, this round was inspired by the German 9×18 Ultra, which was designed in the mid-1930s to provide “acceptable maximum power” in simple, pocket-sized blowback pistols. The key reason for the increase in calibre when compared with the West 9mm rounds is unknown (the 9×18 Soviet has bullet diameter of 9.2mm, while most Western 9mm rounds have a bullet diameter of 9.02mm; Note that use of 9×18 Ultra / Police ammunition in any Makarov pistol is unsafe!).
Also, while the Soviet Army was ahead of many others in the request for a double action pistol, it regressed somewhat in adopting an only marginally powerful round in a weapon that in essence was a pocket-type pistol. At the same period of time, many other armies, looking for an increase in power, starting to change their “weak” 7.65×17 Browning, 9×17 Browning or 7.65×20 Longue pistols to the more potent 9×19 Luger/Parabellum/NATO weapons. The explanation for this fact, however, is rather simple – while most Western countries relied on full-power rifles (bolt action or semi-automatic) and a sub-machine guns as a primary individual armament for the infantry, the new Soviet concept had no place for sub-machine guns, as the only primary arm of the infantry was the newly developed assault rifle. Most Western pistols were required to fire 9mm NATO ammunition just to have commonality in ammunition with the standard issue sub-machine guns; Soviet designers had no such requirements, and by the late forties 9×18 looked as if it was good enough for a military pistol.
Trials for a new pistol started in 1947. Many designs were submitted and tested, such as pistols by Baryshev, Rakov, Voevodin, Simonov, and Makarov. Some designs were submitted in only one of the desired calibres, some, such as the Makarov design, in two, and a few in all three. In 1948, the trials resulted in a selection of the Makarov pistol in 9×18 as a next military sidearm for Soviet armed forces. However, it took three more years to refine its design, before it was officially adopted in 1951 as the “9mm Pistolet Makarova” or PM in short.
The following decades saw the gradual evolution of Makarov pistols, in continuing attempts to produce new pistols with fewer rejects and at lower cost. Most efforts concentrated on production technologies, and by the eighties many parts which were initially made with machining and hand-fitting, became precision-castings that required minimal, if any, fitting. The early sixties also saw attempts to make PM pistols lighter by the introduction of an aluminium/titanium alloy or polymer frames. The lightweight alloy frames turned to be excessively expensive, but polymer-framed pistol, developed in Tula as TKB-023, has passed most of the trials with flying colors. Despite that fact, it was rejected by the military on the grounds of unknown stability of the polymer frame during the long-term (10-20 years) storage and use.
During the last decades of 20th century there were numerous attempts o improve some of deficiencies of PM, most specifically its relatively low stopping power and lethality, and low magazine capacity. First, an improved version of the cartridge, with lighter bullet and hotter powder charge, was developed as 9×18 PMM. This cartridge developed muzzle velocity of 430 meters per second as compared to 315 meters per second of original 9x18mm ammo. Large capacity version of the PM was developed along with the new ammo, which included a slight grip frame redesign to accommodate thicker magazine. Grip panels also were improved. The PMM was offered for both military and law enforcement buyers, and eventually at least few were ordered by Russian police forces, although in standard 9×18 chambering. The 9×18 PMM ammunition was not issued on any significant scale due to the danger of loading the new ammunition into the old guns, which may result in damage to the old and worn-out guns. Instead, Russian Army finally went for a new, more promising pistol, developed at the same state-owned Izhevsk Mechanical Plant, the Yarygin PYa.

The Makarov PM is a simple and sound design, which is considered to be one of the best compact self-defense pistols of its time. While not extremely accurate and lethal at ranges beyond 15-20 meters, it is still a formidable and reliable self-defense weapon.

Several versions of the PM were developed for export market and domestic security use, including IZh-70 and IZh-71 pistols in 9x17mm Browning Short (.380ACP), available in both standard and high capacity variations, as well as Baikal-442, a commercial PM in 9x18mm, also available in standard and high capacity versions, with fixed or adjustable sights.

The Makarov PM is a blowback operated, double action pistol of all-steel construction. Manual safety is located on the left side of the slide, and, when engaged, safely brings hammer down from cocked position, and then locks the hammer, sear and slide. External hammer can be cocked manually for the accurate first shot in Single action mode, or can be cocked automatically by the longer and heavier trigger pull in Double action mode. All-steel magazine holds 8 rounds (12 rounds for PMM pistols), and when last shot is fired, slide remains in the open position, thanks to the slide stop. To disengage slide stop, one must pull the lever on the left side of the frame down. Magazine catch is located at the bottom of the grip, but some export versions of Baikal-442 are available with button magazine release at the base of the triggerguard. PM is fitted with fixed open sights as a standard, with click-adjustable open sights available as an option on export models.

How to disassemble / field-strip Makarov PM pistol: 1) remove the magazine by pressing the magazine release at the base of the grip and pulling the magazine out; 2) check that the chamber is empty; 3) pull the trigger-guard downwards, then swing it to one side to lock in the open position; 4) pull the slide all the way back, then raise the rear of the slide to the top, and off the frame rails; 5) carefully ease the slide forward and off the barrel; 6) remove the return spring from the barrel.
Reassemble in reverse order.