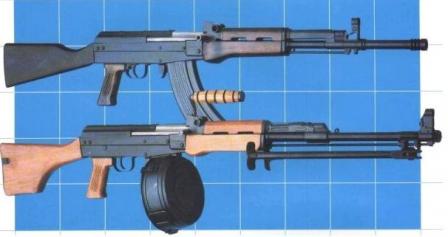 Type 81 assault rifle appeared in the early 1980s. This is a further development of the Type 63 / Type 68 rifles, and it is easily distinguished by the separate pistol grip, handguards and buttstock instead of the SKS-style wooden stock found on earlier types. The Type 81 was more than a single assault rifle – it was a family of infantry firearms, much like the Soviet Kalashnikov AK / RPK family. Type 81 weapons were made as an assault rifle with a fixed butt, an assault rifle with a folding butt for paratroopers (Type 81-1), and a heavy barreled Type 81 Squad Automatic weapon / light machine gun, fitted with a bipod and issued with 75-round drum magazines instead of the typical 30-round boxes. Despite being externally somewhat similar to the AK-47, it is significantly different from it, with its most easily distinguishable feature being an exposed muzzle part of the barrel, with the foresight moved back. This was done to be able to fire rifle grenades from the barrel. Type 81 rifles replaced some obsolescent Type 56 assault rifles and carbines, as well as Type 63 / Type 68 rifles, in most PLA units, and saw some action in border clashes between China and Vietnam during the late 1980s. This rifle was also exported through the NORINCO state company into several neighboring countries. During the late 1980s and early 1990s the Type 81, under designation of Type 87, served as a development platform for the next generation of PLA small arms, being used as a test-bed for 5.8 x 42 ammunition.

The Type 81 is a gas operated, magazine fed, automatic rifle. It uses a short-stroke gas piston, located above the barrel, and a two-position gas regulator, along with a gas cut-off valve for launching rifle grenades. The gas system, as well as the bolt group with the AK-47 type rotating bolt, is reminiscent of those of Type 63 rifles. Type 81 rifles also retain the bolt hold-open device, which catches the bolt in the open position after the last round has been fired from magazine. The fire selector – safety switch is located at the left side of the receiver, just above the pistol grip, and can be easily operated with the right hand thumb. The late production Type 81S rifles have a separate SKS-type safety switch just behind the trigger. The open sights are marked from 100 to 500 metres, with the front sight being mounted just ahead of the gas block, leaving the front portion of the barrel free for the rifle grenade launcher. Ammunition is fed from Type 56 (Kalashnikov) 30-round magazines, or from 75-round drums intended for the Type 81 light machine gun.
At the first glance, the Type 81 assault rifle looks much like the KalashnikovAKM, but, on closer inspection, there are some significant external differences, most notably in the receiver cover shape and front sight location. There is also a significant gap between the trigger guard and the magazine on Type 81 rifles, while on AK-47 type rifles the magazine is adjacent to the front of the trigger guard. On Type 81 rifles the obsolete spike-shaped non-detachable bayonet, preferred by the PLA before, is also replaced with the more "modern" detachable knife-bayonet. Most probably this was required to leave the significant portion of the muzzle area of the barrel unobstructed, which is required for launching of rifle grenades.